Jay Richardson writes for everyone who matters at the Fringe, and others that don’t particularly.

The two things that define him are his constant recourse to reason and his deft turn of phrase. He employs a great economy with words, so that three paragraphs give as accurate a picture of a performance as four or five of most other reviewers. His reviews are never florid, never arch or ambiguous and rarely weighed down by the baggage that other critics bring along with them.

His jabs still sting, despite the bare minimum of force. Of one show he writes that “it has nothing to recommend it but its good intentions.” Another employs “a strategy of diminishing returns”. Another “has to decide on the sort of comic he wants to be”. Ouch.

He sometimes writes longer pieces discussing the industry’s trends, and the questions raised by them. He discussed Sanderson Jones’s use of a naked 10-year-old Brooke Shields for a piece in the Guardian in 2010 but was typically happy to leave his conclusions open-ended. In another he wonders whether Jim Davidson has entered “a Charlie Kaufman-esque phase of creative metabigotry”.

If Richardson has become jaded by the amount of comedy he’s seen, it shows only in his parsimonious distribution of stars: it takes quite a lot to get four of them out of him, and he often complains that shows fail to conclude or make a profound point. He sometimes seems to enjoy a show only to mark it low for having “nothing much to say”. Caroline Mabey’s has “nothing at its core”, Marcus Brigstocke’s “no grand revelation”. Arguably, not all stand-up shows at the Fringe are designed to give an audience the comedic epiphany that Richardson seems to constantly crave, and it’s a shame he always slips into this groove. To his credit, though, he rarely writes a stick-the-boot-in one-star piece either; remaining resolutely a man of the middle. Thankfully he gives the same attention to detail in a three-star as to something he admires and – increasingly rare in Fringe reviewers these days – he is never dismissive, even when his review seems to be a longhand and politic way of saying that what he’s viewing is utter tosh. 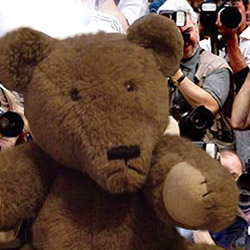