this is an article from 2017Poo-Pooing the Thesps

This article was first posted on Thursday, August 24th, 2017 Filed by Mister Kipper

Where is that awful stench of not-proper comedy coming from? From a theatre near you, says NATHAN CASSIDY 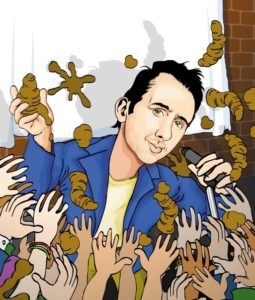 What links Daniel Kitson, Mark Thomas and Nathan Cassidy? That’s right, they’re all awful. They all used to be very good of course, but now they’re indisputably rubbish.
It’s a well known fact that it takes about 10 years to be good as a comedian and then you have about 6 months being good and then you’re sh*t again.

The trouble is, of course, it’s incredibly difficult to write a joke. Just like a footballer whose knees give in, eventually the comedian’s genius withers after being battered by ten years of indifference from a public that would rather see someone on YouTube firing ping pong balls into a goat’s mouth.

The comedian starts to make excuses: “That just needs a punchline”… which would be like falling to your death from an aeroplane and trying to convince everyone around you that all you need is a parachute. So if you haven’t got a parachute what do you do? Simple: you turn to theatre.

It’s as easy as that. As long as you bill it in the theatre section of the Fringe programme you’ll be fine. You’ll be more than fine. Last year Mark Thomas won his third Fringe First award with his theatre show The Red Shed. Had that show been listed in the comedy section, it would have been pelted with excrement.

Every joke in a theatre show gets about eight times the reaction it would get in a comedy show. In short, theatre is easy. It’s why ex-footballers all go into punditry: they’re knackered, and it’s easy. It’s just talking out loud, the easiest thing in the world. Or just turn up, a la Phil Neville.

Put on a bad play and the audience will sit through it without question. If they don’t understand it, it’ll be deemed ‘high-brow’.

A mate at school, Dan Goodchild, once did the world’s worst drawing for his A-level – the perspective was all f*cked. At the last minute he changed the title to Out of Perspective and was awarded an A. Shocking.

By the way, that bit about Dan Goodchild is the only part of this piece that’s true. So sorry if, like an increasingly vocal number of comedians, you agreed with the idea that theatre is just a crap-out.

Clearly Kitson, Thomas and Cassidy are two of the greatest comedians ever to have lived, and theatre gives stand-ups total creative freedom. The Red Shed was brilliant; Kitson’s Mouse at the Traverse last year was probably the best thing I’ve seen in 10 years of coming to the Fringe, and that includes seeing Geoffrey from Rainbow ending a show by revealing the fluffy corpses of Zippy, Bungle and George in a cupboard.

Yes, it was a joke. But it’s funny how some in the business take ‘proper comedy’ too seriously. 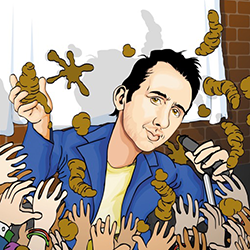