A Piggy Interview WithJacqueline Novak (How Embarrassing For Her)

Describing one’s own work is ugly business, but I suppose it’s stand up threaded with personal narrative…some coming of age, female stuff. Embarrassment is the theme…my embarrassment for myself, for other people, for humanity and even for ghosts, inanimate objects and of course, penises. The Her in my title can refer to the penis if you like because at one point I try to reframe the organ as a feminine icon….you’ll have to come to the show to see if I succeed. The show is about parsing what does and does not deserve our embarrassment. If I had a really clean description of the show for you, it would take the life out of it for me. And I have to keep the life in it if I’m going to perform it. It’s got a lot of my notions about sex related things — how I saw things as a high schooler versus now…defining my identity and what kind of “girl” I wanted to be. I tend to have a mystical perspective on things — even crass things — and I’m always disappointed when life’s mundanities get in the way of that — i find that embarrassing. Embarrassment intrigues me, because it’s not shame. Shame is more about something you’ve done that’s truly wrong. Embarrassment has to do with matters of taste and ego and I feel like what you choose to find embarrassing can really affect your life. It’s worth looking at.

I first tried stand-up at an open mic night in a comedy club inside a hotel near Washington Dc where I was in college at the time. It was mostly older men. I vomited when I got to the venue. Then I had my first Lemon Drop shot! I had Judy Carter’s The Comedy Bible in my purse, which I was scared would slip out and the men of the mic would mock me for consulting a manual.

Occasionally I call on the support of any nearby ghosts or other disincarnate beings — Phantom of the Opera style. I’ve always wanted a sidekick without a body.

Best review said I give audiences my “unalloyed self.” Had a nice alchemical ring to it. The worst review is no review. I haven’t been reviewed enough. Please review me.

It probably wouldn’t be wise. Reviews tend to comment on a show’s essence and execution and I’m not going to change those. I think reading reviews  would only put me in my head, which serves no one. In order to put on a good show, I have to actively gt myself out of the perform-and-be-judged mindset. Even good reviews are a prison. Thinking in those terms puts me in the very opposite kinda space I wanna be in before a show. It makes me feel like I’m at the Olympics, nervously taking the ice, wondering if I should have put my jumps earlier in the competition. It’s no good, certainly not why you get into the art game. If there is a piece of constructive advice in a review, such as “she keeps mispronouncing the word suffice,” then I imagine that would get back to me. I need to put blinders on and focus on the work. there’s plenty of feedback already coming my way in the faces of audience members,

I don’t know any reviewers personally. Generally, I fear them. They are there to serve the audience and help them discover what they should go see. Seems fair enough. I wish the artists didn’t have to see them. Sometimes I wonder if critics forget that artists also don’t necessarily think their own work is flawless. Often by the time you “finish” a piece, you’ve already been thinking of what you want to do with the next project for some time. The vase has been baked in the kiln and you’re sitting their glazing the pot, you’re probably aware of its merits and lackings…and thinking…next time I’m going to explore more organic angles. But you still have to let the current piece dry and put it out in the world. Because someone might want your right angle vase.. It would be a disservice to smash it and start again. I am a defensive type so if someone is like “there’s mustard on your shirt.” I’m like “Oh, I know. I’m already upset about it, and there’s nothing I can do about it now. I’m not going home to change. So at least, do be aware that I am aware.” I always thought it would be fun if artists got to review their own work, alongside the other reviews.

The physical appearance of audience members should probably be left alone. Otherwise, I don’t inherently believe any subject matter, topic, area, is off limits. Sad or dark topics tend to have a higher degree of difficulty and if someone does it well, it’s thrilling and life affirming. It’s the best. Cathartic. Let’s aim high, yeah?

No. I think when people say “that bit went too far” it just means in their eyes you failed at making something interesting or funny. Too far is so subjective.

There have been lots of good times. Big theaters are really fun, opening for Mike Birbiglia or Anthony Jeselnik, getting to strut the stage in front of attentive audience. Being an opening act on those shows has actually been really fun because the expectations are low and people are like “oh no an opener,” but then if you win them over, you feel cool. But also, small cozy new york city nights, at a little venue with people you’ve known forever — those are fun too. If my comedy life flashed before my eyes, it would stand to reason, it would be one of those cozy nights that would come up. But I’m a cheeseball. Sometimes bad gigs are really fun, when you have other comedians to share them with, to relish the sheer horror of a bad set up — like a basketball game playing on a big screen behind you while you’re doing jokes.

Find Jacqueline Novak on the web - 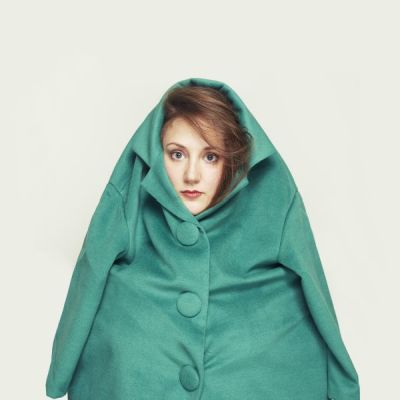 Find Jacqueline Novak on the web -

I don’t know any reviewers personally. Generally, I fear them. They are there to serve the audience and help them discover what they should go see. Seems fair enough. I wish the artists didn’t have to see them.