Tell me about your Edinburgh show
My show is called ‘God Digger’: I’m a practicing Catholic (and an observant hypochondriac) and in my exciting life in our lovely planet (a.k.a. “vale of tears”) I try to find a balance between my sinful ambitions and my congenital guilt. Will I succeed? If you come to the show you might find an answer…

Tell me about your first gig.
It was in London at the Comedy Store, on the 24th February 2014. It’s a night called Gong Show, which is defined as “the London’s most brutal open mic night”. It was my first ever gig and surprisingly I won it!

Tell me about your best and worst review.
The best review I have received so far is a 4 star one from the Scotsman: “Embarassing sometimes, weird occasionally… There is something about his use of the English language that heightens the enjoyment. It is cliché-free”. The worst review I got was last month from a Uber driver: I told him I was a comedian and he asked me to tell him a joke. I gave him my best short set and he suggested I should find a day job. That was very disappointing.

During this Edinburgh run, do you plan to read reviews of your show?
Yes, because I am too curious and it makes me feel like a B&B on Tripadvisor.

How do you feel about reviewers generally?
I guess we share the same passion for comedy, but I don’t understand how they can watch so many shows and don’t feel the urge to jump on stage themselves.

In April 2018, YouTube comedian, Markus Meechan (aka Count Dankula) was fined £800 for training his girlfriend’s pug dog to do a Nazi salute with its paw, in response to the phrase ‘Gas the Jews’. Do you believe Meechan committed a criminal offence, and why?
I don’t know, but I watched the video (only few seconds, it was too boringly ugly) and I think it’s a very bad joke. Also, he kept harrassing the poor dog, isn’t that a criminal offence itself?

Are there any subjects that are not suitable for comedy?
No there aren’t, as long as the subject is related to the comedian’s experience.

Have you ever gone too far?
Not that I am aware of. Although sometimes I make jokes about cancer, explaining that my mother died because of it, and I often get mixed reaction from the audience.

Looking back over your time as a comedian, tell me about the best gig of your career.
Probably the final of So You Think You’re Funny in Edinburgh: I was very very nervous, the room was huge and packed and I managed to win. I was all over the moon and it is still one of my sweetest memories!

Find Luca Cupani on the web - 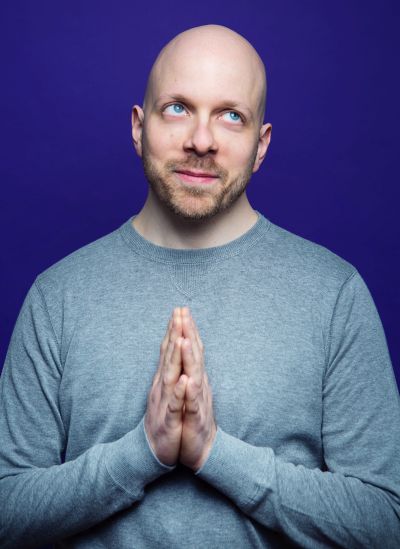 Find Luca Cupani on the web -

The worst review I got was last month from a Uber driver: I told him I was a comedian and he asked me to tell him a joke. I gave him my best short set and he suggested I should find a day job. That was very disappointing.