We interview the audience for the job of Audience. If successful, they get to watch the show. For too long comedians have been forced to perform their product to an undiscerning customer base. Some people don’t deserve to be called an audience, and we’re only hiring the best. Comedy is an industry, and we are its captains.

Sam & Tom’s first gig was in the unconstituted basement of an independent boutique. One of those places that sells ship’s wheels and faux-rusted wall signs and then opens a tag-on venue in the basement and wonders why it can’t afford chairs. Great fun. The audience were all kids and we did our killer BMX Bikers material, sang some Casio keyboard demo songs, and held a gin raffle. We’d just come out of a legitimate-leaning sketch group and this period of our lives was characterised by its boyish experimentation and loss of credibility with our peers.

We always hug, sometimes with a pat o’ the back if there’s a frisson in the air, then we punch each other a couple of times, sometimes quite hard, then Tom often jumps up and down on the spot and says something like ‘Big daddy oh boy’, or ‘Give me the light of the Lord’. I generally go very quiet and don’t do the jumping thing because I reckon people can hear it. Then we’ll go out and stomp on the gig till its dead.

Best reviews are the florid ones. Last year we stumped up the obligatory £40 to get The Mumble in because we love the mythology. The similes are “like an alka-seltzer in a flagon of whiskey”, and we managed to get four stars despite it being the worst show of the run and the guy spending part of the hour outside on the phone to his girlfriend. Worst review is probably when Bruce Dessau assumed we were Footlights. If we were Footlights you would’ve heard of us 5 years ago.

We’re interviewing for an audience, so reviewers are essentially mystery shoppers, and their feedback will be taken into account, but we will call out anyone just using it as a summer job. But given we haven’t paid anyone a thousand pounds to email off our press releases for us, we don’t expect to get (m)any.

Ah, the jester’s kingmaker. It’s weird because they’re coming into an environment where the joy of it is in the unpredictable relationship between the performer, their material, and the audience, and then they make a judgement as though only two of those factors are present (except for The Mumble, tbf). There ought to be a central website, like Tripadvisor, where reviewers have to leave their reviews on an act’s page, and then the act can respond to it if they feel maligned. People can usually tell when a response is petty, and when someone’s had a nightmare reviewer. That would be much fairer, don’t you think, FringePig?

Being a YouTube comedian ought to be a crime.

Anything a University improv revue thinks is funny.

It depends whether you’re a moral relativist or not. We made a heckler cry once, but doing so got a big cheer. We felt bad afterwards, so I guess morality is more of an internal compass, which makes it meaningless. If we shot someone though I think consensus would be we went too far, so there’s definitely got to be a line in the sand somewhere. That’s probably how law was invented.

Tom’s got the memory I’m afraid, all thoughts for me fade to ash as a I trailblaze across the night like a spider crawling across the stars. Probably one where the audience gave lots in terms of energy and money. A good haul. Yes, I like the sound of that sort of gig.

Sam and Tom was talking to Wrigley Worm.

Find Sam and Tom on the web - 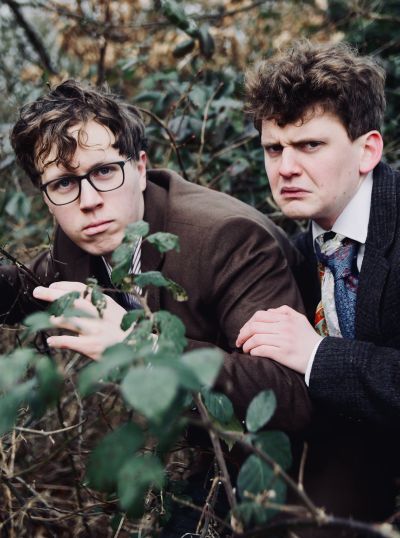 Find Sam and Tom on the web -

Last year we stumped up the obligatory £40 to get The Mumble in because we love the mythology. The similes are “like an alka-seltzer in a flagon of whiskey”, and we managed to get four stars despite it being the worst show of the run and the guy spending part of the hour outside on the phone to his girlfriend.