‘Songs By Kylie’ celebrates the Kylie Minogue songbook and is also a gentle biopic, starting with her time on Neighbours, early days with Stock, Aitken and Waterman and rebirth as the ultimate disco diva. For the sake of storytelling and lots of humour, I AM Kylie – behind the piano but without impersonation or costume. Mostly it’s about sharing her songs and every one is a winner.

My first solo gig after a lifetime of performing in musicals was a tribute to Madonna called ‘In Vogue’ which had Edinburgh seasons in 2013 & 14. Much like the new Kylie show, I perform it without drag, seat myself at the piano with the emphasis on the songs and stories behind them. There’s always few laughs too. That show was such a joy to perform that I’m still going 5 years later and have 6 other shows under my belt, including tributes to Annie Lennox and Cole Porter.

Only boring things like having a good stretch and doing a vocal warmup. During the day of a show I make sure I’ve had enough water and caffeine and I always give myself a little pep talk just before I enter the stage. Thankfully I still get nervous before every show and that gives me the energy I need.

My worst review was in my first year at Edinburgh – a young reviewer was very disappointed that I didn’t look or sound at all like Madonna. In my defence – that’s half the fun of the show! A best review doesn’t come to mind but I did win a Helpmann award for Best Cabaret Performer a couple of years back and that’s the best compliment I’ve ever been given. It’s the Aussie equivalent of an Olivier or a Tony and I’m still super chuffed.

I often proudly boast that I ‘don’t read reviews’ because they are distracting but usually I can’t help myself. I find that the only criticism that really stings is when you know it’s true. This show is unashamedly feel good and pretty camp, if you’re a massive Kylie fan like me, it’s impossible not to have a good time. Her songs are heaven!

I find reviewers on the whole to be very supportive and keen advocates of the performing arts. I also take account of how well written a review is before I take note of any criticism – if a review has poor grammar or syntax, I won’t be so bothered about their opinions.

Are there any subjects that are not suitable for cabaret?

I think as long as there is ultimate respect for the audience and humour is involved, absolutely no subject is unsuitable. We’re all in this together and we’re all going to ultimately suffer and die, why should anything be off limits? Sometimes you have to laugh.

Years ago I did an appearance at a government function when first promoting ‘In Vogue’ and I chose a particularly profane part of the show to perform. I was expecting laughs and ovations but as soon as I began, people started standing up and walking out on me. Unbeknownst to me there were some primary school age children in the room and the crowd weren’t really ‘theatre goers’ so the material was all wrong. I was completely devastated and these days am always very cautious about reading a crowd first.

Performing my Cole Porter tribute at Royal Albert Hall last year was definitely a highlight. I was invited after being seen in Edinburgh the previous year and I played on the lipstick-red piano donated by Elton John (of course!) and used the same mirror ball Kylie used for her Christmas party the year before. I was in gay heaven!

Find Michael Griffiths on the web - 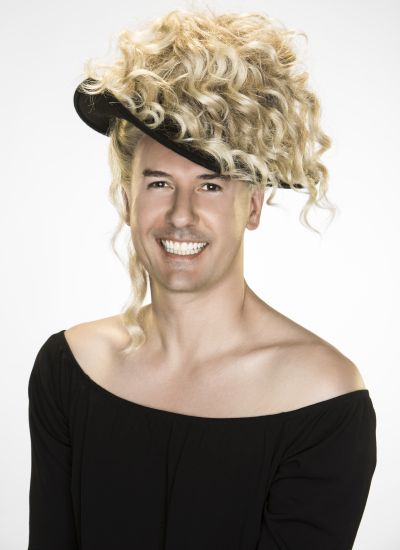 Find Michael Griffiths on the web -

My worst review was in my first year at Edinburgh – a young reviewer was very disappointed that I didn’t look or sound at all like Madonna. In my defence – that’s half the fun of the show!