Growing up in the deepest darkest parts of India and then being thrown into the west with no language, culture, personality, looks, or even a clue.

I’m originally from India and came here with no English at all. I was also a massive introvert and nerd and so had to learn English and the British culture.

My First gig was part of my showcase on the course and I rehearsed my material hundreds of times out loud, and I was shitting myself completely. But when I got on stage I must have gone on auto pilot because I didn’t remember what happened on stage, I must have done my whole set on auto!

I’m a Tony Robbins fan and have done most of his seminars. So I warm up by just being social and talking to loads of people which gets my energy levels up and gets me out of my head! I don’t eat before stage at all and drink loads of water.

Best gig was in Croydon where everything went perfectly they laughed at every pause. I felt completely in control and relaxed. I had visions of hammersmith apollo after that! Then the next evening I was gigging Norwich and was first one in some competition and completely died like not a single laugh, just a very very slow clap at the end as I walked off. The next guy was high energy and he completely killed the room. and I thought that room needed high energy and then the next guy was very low energy and also killed the room!

No other comedians will tell me about them and I’ll see it on my facebook feed, but I won’t be reading the first hand!

I think reviewers have it tough. Comics on Facebook are always slagging reviewers off! I don’t get involved. If I get a good review I’ll use it. If not, I’ll ignore it – quite simple.

Thats a tough one, I didn’t really follow that news or any other news to be fair. But if his Jewish then he might have some come back. I used to flat share with this Jewish guy who got abused by his Jewish parents and the Jewish community he belonged to and he completely hated the Jewish community at large. Would spend a lot of time and effort condemning Jews and defending Hitler!! Quite verbal about it as well.

I think any subject is open as long as it’s done in the right way and it’s not punching down.

My best gigs have been Gong shows where I get through the 5 minutes. which I’ve done about 4 times each on Manchester Comedy store, frog & bucket and Spiky Mikes Gongs.

My best shows was my 1am Compilation shows full run at the Espionage in Kasbar. This is the time when the drunks have gone home and the really drunk zombies are left. I used to get threatened on every show so the management quickly put a bouncer right in the middle of my show. Who would sit on his high chair and escort several people out per show!

Find Joe Bains on the web - 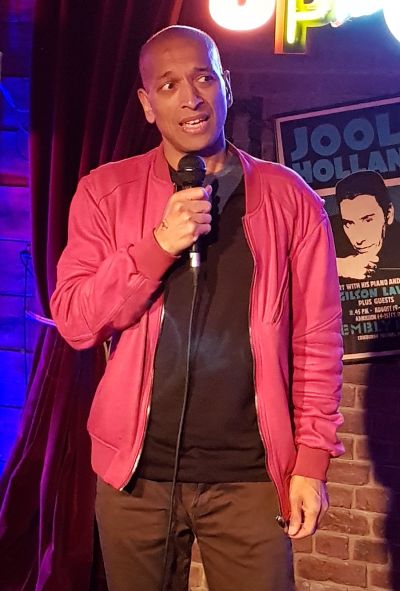 Find Joe Bains on the web -

I think reviewers have it tough. Comics on Facebook are always slagging reviewers off! I don’t get involved. If I get a good review I’ll use it. If not, I’ll ignore it – quite simple.