My Edinburgh show is a true, survival-against -the-odds story about a nasty car accident that I had last year in Los Angeles. It’s about what happens when a spur of the moment decision causes irreversible life change.

It marks a departure from my previous work. More of a story, less a collection of random jokes.

I started comedy in the late 80s but my first proper gig was when I went on stage with my double bass for the first time. Before that I had tried all sorts of different delivery styles: energetic, deadpan, pretending to be drunk, wild and crazy but I could not find my comedy voice. Then one day I decided to go on with my double bass wearing the accoutrements of the classical musician – a kind of reject from the Philharmonic. It worked! This became my stage persona for the next 30 years…

I have tried everything: voice exercises, press-ups and wearing lucky socks.

None of the above will save poor material.

Since my last Edinburgh Fringe I’ve noticed a lot of shows putting 4 stars on their poster. It reminds me of Employee of the Month at MacDonald’s.

My worst review came from the club secretary at a working men’s club in Gorton.

It was one of those grim Northern talent shows like you’d see in Phoenix Nights. To make matters worse It was lunchtime gig so most of the audience were facing the wrong way. They were eating fish n’ chips and their kids were running about the place.

The club secretary approached me and said “If you perform here you are expected to join the Variety Artists Federation. That’ll be ten pounds please”

I paid her my dues and went onstage where I lasted about 2 minutes.

The club secretary comes up to me after the show and says “The board have considered your membership submission and the answer is application denied. Here’s your ten pounds”

My best review was: ‘Mr Tavaré’s show involved a pyro explosion which set off the smoke alarms in the theatre. The entire audience were evacuated, and Mr Tavaré had to finish his set in the car park’

Reading reviews gives an insight in how people see you. But there isn’t much we can do to change who we are. Comedy is subjective, and you have to accept that not everyone finds you funny.

A comic is merely the chicken who lays the egg. The reviewer is the one who comes along, bashes its head in with a spoon and eats it for breakfast.

In my view, the posting of the video was irresponsible and in poor taste. He describes himself as a ‘comedian’ but I’ve never seen him perform. Conversely, it is important to preserve free speech.

I once did a gig in the Falkland Islands. It took 30 hours to get there. That’s what I call too far.

In 2003 I was invited to perform a private engagement at Highgrove for Prince Charles and in attendance was HM The Queen and 13 crowned heads of Europe.

After the show I remember chatting to members of the audience on the lawn and one bloke introduced himself as the King of Norway.

Prince Charles then asked me where I was performing next and I told him the following day at The Fox and Hounds, Wood Green.

Find Jim Tavaré on the web - 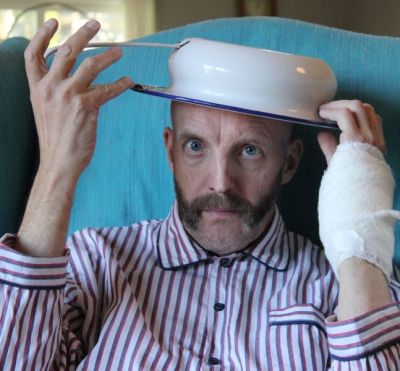 Find Jim Tavaré on the web -

My best review was: ‘Mr Tavaré’s show involved a pyro explosion which set off the smoke alarms in the theatre. The entire audience were evacuated, and Mr Tavaré had to finish his set in the car park’