Growing up, I never really thought about becoming a father. I never saw any dads with cerebral palsy; which made him think I’d never be one. Besides, my younger self was way too selfish to take care of another human being. The most he’d ever managed was a cactus, and even that died from lack of water. He was far too in love with having a disposable income and going for a poo with no children watching.

But when I meet my wife-to-be, she states I’d better be prepared for the fact she wants babies… which is a pretty strong opening line for a first date! What follows is the hilarious, honest, warm story of two people with cerebral palsy traversing the ups and downs of parenthood.

If I was irresponsible to have kids – which was one of many accusations levelled at me from social media when a documentary about me and my family was put on Youtube – then it’s nothing to do with being disabled! In fact it’s probably more to do with things like balancing his wife’s crutches on his son’s baby walker to make him look like a Dalek!

The first time I did the fringe; one particular performance was met with stone-cold silence for the entire hour, punctuated only by polite rounds of muted applause every so often. Maybe they thought they were watching a piece of performance art or something? I was absolutely perplexed; as the show had gone down exceedingly well up until this point. By the end I was so distraught that I was just about ready to quit comedy for good. Then I took a peek at my departing audience to overhear their conversations and discovered that every single person there had been from overseas – French, Japanese, Italian etc – and not a single one of them was speaking English. A few weeks later I was sent a copy of a French magazine with a review of that night’s show in it. I dread to think what it said – I never bothered getting it translated!

I use my inhaler, but that’s more of a medical necessity than a ritual!

I think my favourite ever one was a 4½ star review from the Adelaide Advertiser which said: “At the end of a Laurence Clark performance, apart from being a bit tired from laughing, one has come to understand some of the travails of his world – and one has become very fond of the man himself. ” I’d only been in Australia for a couple of days and I’d never performed abroad before so it was a big confidence boost. Still don’t get the ½ a star thing though!

Obviously as a stand-up you get in the press and have to take the rough with the smooth. It probably wasn’t my worst review, but one that really got my goat said: “Full marks to Laurence Clark for raising awareness”… and there was me thinking my job was to make people laugh! I’ve always hated this concept of awareness… it just sounds so passive, meaningless and shite. For example, I have awareness of the Daily Mail in that I’m aware it exists – doesn’t mean I pay attention to a single word it’s got to say though! Similarly I have Jim Davidson awareness – I’ve even suffered watching a whole bloody DVD in the name of comedy research – but that’s not to say that, if we ever came face-to-face, I wouldn’t ram the handle of my wheelchair into his nuts which, in turn would give him Laurence Clark awareness!

Yes, because curiosity always gets the better of me. It’s just human nature! I think the reviews I’m dreading the most are those from my sons Tom and Jamie, because most of this show is about them and I’ve deliberately made it a 12A certificate so that not only them but other kids their age can see it.

I have absolutely no problem with reviewers who review my comedy, whether their review is good or bad. Unfortunately some reviewers take it upon themselves to review my disability as well, frequently with inaccurate / borderline offensive results! If I wanted a medical diagnosis the last person I’d ask is a comedy reviewer!

I’m not sure if it breaks the law but I don’t find it particularly clever or funny either.

Comedy thrives on breaking taboos. Disability still seems to be considered a taboo which is why you get so many comics doing material about it. But because I’m disabled I think sometimes there’s a preconception that my act is going to be worthy in some way and not particularly funny. Sometimes people say to me “you don’t do comedy about disability do you?” as if they think it’s going to be really depressing. However no one would dream of telling Graham Norton to not do material about being gay. All stand-up comics use aspects of themselves and their experiences to create material and I don’t see why disabled comics should be any different. So I tend to use uncomfortable, socially awkward past experiences as inspiration – it can be very cathartic! Oh yes, and funny! Very, very funny!

Once in a Liverpool comedy club I made a joke about hoping Ringo Starr passes away before Paul McCartney, because if he’s the last of the four to go then it’ll be a bit of an anti-climax. I can still see the tumbleweed now rolling across the stage!

Definitely when my mate Jess Thom came to watch my show. Jess is a performer with Tourette’s syndrome and, frankly one of the funniest people I’ve met. The majority of her tics make her say words like ‘biscuit’, ‘hedgehog’ and ‘Alan’ a lot, but every so often she will come up with the kind of surreal juxtaposition of two completely unrelated concepts that comedy writers like myself spend hours scratching our heads over. At the top of the show I introduced Jess to the audience. Then as I got into the show I found it quite easy to ignore her constantly shouting out biscuit, hedgehog and Alan. But every so often when I paused for breath, Jess would finish my sentences in surreally funny ways that other stand-up comedians could only dream of. For example, “I guess all I’ve ever wanted is what anyone wants in life, namely… dancing cats!” And then there was my personal favourite: “If you start to think about your moments of instant regret, one defining incident will probably leap out… like kicking a duck in the fanny!” It was like having a heckler in the audience who sometimes gets better laughs than you. It really made me up my game.

Find Laurence Clark on the web - 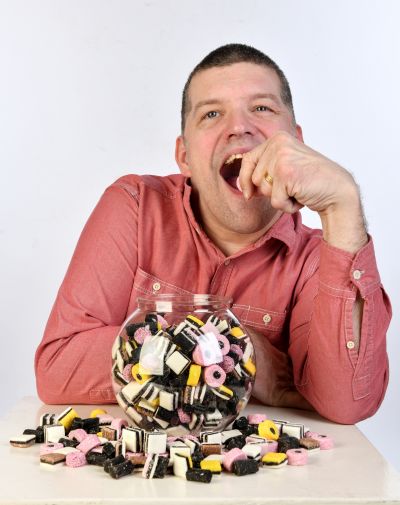 Find Laurence Clark on the web -

It probably wasn’t my worst review, but one that really got my goat said: “Full marks to Laurence Clark for raising awareness”… and there was me thinking my job was to make people laugh! I’ve always hated this concept of awareness… it just sounds so passive, meaningless and shite.