A Piggy Interview WithLee Kyle (Kicking Potatoes into the Sea)

One time last year I kicked some potatoes into the sea. The doctors were very insistent that I have some tablets afterwards. I mean, this was a culmination of things, it wasn’t just that everything was fine and then I kicked some potatoes. The tablets were brilliant, I felt great, then there was a twist but I can’t tell you what that is as it would render it moot. Basically though, I had a great gig at that funeral. Round of applause for a eulogy, now THAT’S a comedian. The shows like that but not mawkish.

It was at the end of 2009 at The Kings Manor pub in Newcastle, which is now a letting agency for students. I think I talked really fast about Ringo Starr and paedophiles for ages and thought I’d done great. Comedy was easy, I’d decided. I honestly couldn’t understand how comedians would ever have bad gigs, it was never going to happen to me. It did happen to me.

I just gossip, I’m terrible at secrets. For example, do you know that the Greek comedian George Zach once wanked his cousin off when they were 16? You do now.

None spring to mind really, I think the important thing is that I’ve been described as a ‘genius’ in reviews three times. Now, I know that reviews are arbitrary, two people could make a mistake easily, but three? Come on now, that’s a consensus. My worst was when I was a wrestler and somebody gave credit to the other bloke for our match even though I led it all from start to finish AND the useless bastard broke my nose. That was in 2002 and I’m still annoyed.

No. They might make me sad and it’s my show, people can think what they think but you shouldn’t write by committee.

In my teens, my dream job was being a music reviewer for Melody Maker. They were amazing writers; the music was pretty tangential to them really. They talked about the wider culture, about the future and they taught you things. They didn’t patronise you or dumb things down, they wrote lengthy essays about all sorts of things that were passionate and hilarious, and they were able to have some small effect on the culture of the nation.

So I have no problem with reviews. I’ve never seen a comedy one do that though and there’s no reason why they shouldn’t. I’m not hugely arsed in reading about a ‘Northern comedians’ show being ‘a bit clubby’.

No idea, I’ve not really looked much into it and am assuming that there is more nuance to the case than this question suggests. Perhaps I should be more bothered and I can see that freedom of speech issues should be a bigger deal to comedians but I just can’t find it interesting. Also, I don’t fully believe in unlimited freedom of speech and I’m not sure many people really do. Should we be able to shout ‘Fire!’ in a nursery or threaten an old lady? I’m not sure we should really but, if we should, I’m not excited about it.

You know how Evelyn Beatrice Hall (not Voltaire, as, admittedly, I thought til now) said “I disapprove of what you say, but I will defend to the death your right to say it?” Well, I’ve just checked and she died at the age of 87 of natural causes, so she was talking out of her arse.

Don’t know. Probably. I’d suggest it was dependent on various factors. I do a fair few kids gigs, there are obvious limits there. Mostly though, probably not but there should be limits on which comics do what. But, well, how do you police that? You can’t.

Nah, not as far as I could see. I’ve got a dimple you see, it makes people assume I’m nicer than I am.

I can’t tell you I’m afraid, there’s probably going to be a bit about it in the show. Not in an ‘aren’t I great!’ way more in a way that it’s pretty central to the story. To make up for that, I can tell you that I did a gig, in a shopping centre in Hamilton, to zero people once because, if the council turned up and the stage was empty, we wouldn’t get paid. I did pretty well.

Find Lee Kyle on the web - 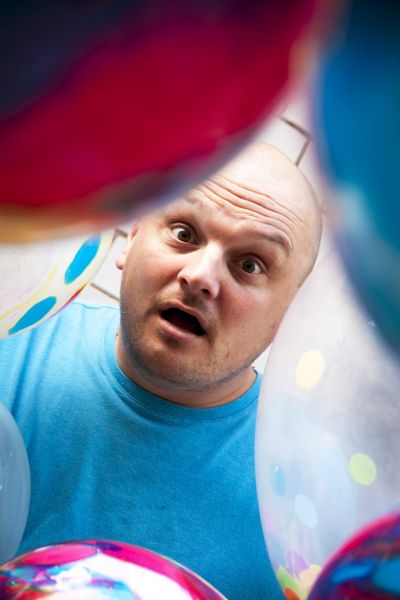 Find Lee Kyle on the web -

I’ve been described as a ‘genius’ in reviews three times. Now, I know that reviews are arbitrary, two people could make a mistake easily, but three? Come on now, that’s a consensus.