A Piggy Interview WithLloyd Langford (Why the Big Face?)

It’s called Why the Big Face? It’s an hour of jokes about pressing concerns I have including terrorism, paedophile hunters and the correct feeding of garden birds.

I was a secondary school and they did a charity Christmas dinner for local pensioners. I was the MC and I flattered the women and rinsed the men. They seemed to love that. I told one guy that he had so many wrinkles on his forehead he probably had to screw his hat on.

I’m not sure great reviews are much fun. When I did The Comedy Zone we had a terrible review that was a laborious metaphor to Harry Potter that went straight into the sorting hat (bin). I don’t mind reviews from someone who didn’t like the show but it’s frustrating when the reviews are poorly written, quote entire jokes or contain obvious inaccuracies. A lot of reviewers in Edinburgh now seem to be people who have just started a blog as a way of getting free fringe tickets. You’ve got to take what the disgruntedtoaster.org says with a hefty pinch of salt.

No. I avoid reading any reviews during the festival. Though occasionally I’ll treat myself to an absolute stinker about someone else. Julia Chamberlain’s review of Pete Jonas’ “Dark Side Of The Poon” is like a fine brandy. Each visit reveals new layers.

I think there are very few career choices that a comedian can legitimately look down upon. Human statue and comedy reviewer are two of them.

I don’t think he did commit a criminal offence. That’s not to say I don’t think he’s a massively overripe plum. Freedom of speech shouldn’t mean freedom from consequences and all this “dank meme’” “edge lord” dogshit is the most simplistic schoolboy toss. I also think the problem with it was that it wasn’t particularly original or funny. Tor Borg taught his dog to do a Nazi salute in Germany in the 40s and was investigated by the Nazi’s! Now that takes some stones. If this Meechan bloke had trained a giraffe to emulate the president of Uganda and then mockingly paraded it in front of Idi Amin, maybe I’d have a bit more respect for him.

Yes. I once fell asleep on a night bus and ended up in the depot.

I’ll tell you about something that has only happened to me at one gig. I was supporting Rhod Gilbert at the Hammersmith Apollo and when he introduced me, I could actually physically feel the air rush towards me as the audience of 3500 people clapped and cheered! And I was just the support act. It was exhilarating.

Find Lloyd Langford on the web - 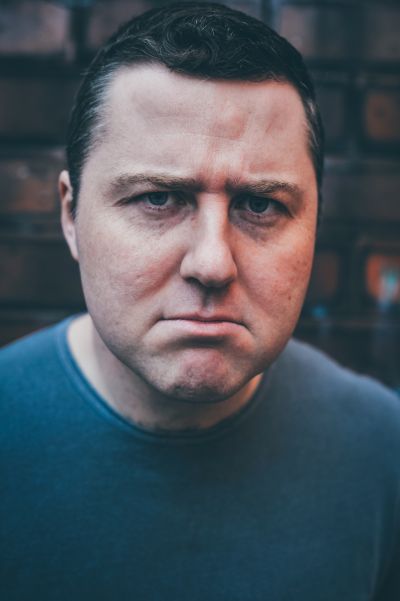 Find Lloyd Langford on the web -

I think there are very few career choices that a comedian can legitimately look down upon. Human statue and comedy reviewer are two of them.