Paul Mitchell gives his readers the unusual feeling that he is trying very hard to explain what’s going on onstage, yet leaves you with very little idea what went on onstage. There’s a lot of florid prose that just bursts into nothingness like sprays of cherry blossom if you get too close to it.

Sometimes this is because he is unable to follow his own thread, and occasionally because of his own arch attempts at journalistic flamboyance.

For example, it is very hard to follow his review of Sooz Kempner when he keeps getting her name wrong. It appears to be sloppy journalism, but we later learn that Kempner ‘takes umbrage’ when reviewers misspell her name, so it turns out he’s doing it just to be annoying. How funny! Confusingly, he inserts a Private-Eye-style “[That’s enough – Ed]” after one attempted misspelling where, it appears, he accidentally spelled Kempner’s name correctly. So here I am, trying to assess a reviewer who makes a joke of spelling an acts name wrong and fucks it up by spelling it right. A reviewer who has so little respect for an act that he is quite willing to spell her name wrong throughout a supposedly forthright appraisal of her work, just so he can do build up a sort of annoyed tension in the reader so that he can do his own joke. A shit joke. Which he fucks the fuck up. This is why we advise comedians to just say no to Fest reviews. They’re not worth the headache.

When Mitchell tells us that Paul Williams’ show has “a convoluted deconstruction of the process of dealing with hecklers” (okay good), “underpinned by the perceived pressure of performing in the shadow of his ‘more successful’ older brother Guy Williams (depicted by Paul who literally performs with the shadow of his older brother)” I’m confused. Does he ACTUALLY have the disembodied shadow of his actual brother on stage with him, Paul? Because otherwise that ‘literally’ is in the wrong place at the wrong time, isn’t it? Partially thanks to this distraction I have little idea of what transpired in front of the audience.

Michel’s foreword on Dave Callahan is clear enough: “With just weeks to go before this year’s Fringe, comedian David Callaghan went missing without a trace. Organisers, suddenly left with a vacant venue slot, simply replaced the missing comic with a convenient namesake.” Sounds like an intriguing conceit. Did it work? Well, I don’t know. There are tantalising glimpses of bits of stuff in the show, but any causal link between them Michel pretty much keeps to himself as he flits from one bit to another en route to a conclusion he reached out of sight.

Frustratingly, his review of Nick Mohammed’s Mr Swallow is wonderfully concise, explaining what occurred onstage with occasional pull-aways to appraise the showmanship. For some reason, in this review, Mitchell manages to keep his ego out the picture – not that it’s any consolation to Mohammed, who gets three stars like pretty much everything else Mitchell digests.

“The kitchen sink approach is bafflingly incoherent at times”, Mitchell concludes of Callahan – and that’s a lesson he should perhaps dwell on. Mitchell isn’t terrible, but he needs to put his bloody feet on the ground. And stop trying to do jokes.

Paul MitchellWriting for Fest (Reviewed in 2018) 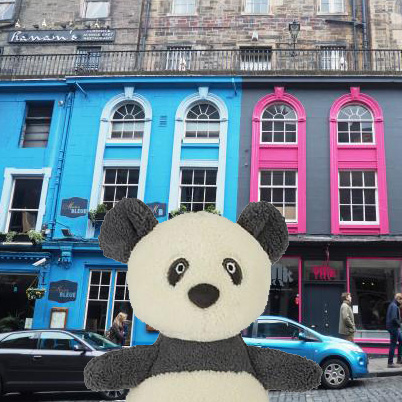