It’s a mash-up of my favourite characters over four sell-out shows. It’s a kind of best-of show featuring four characters including Georgina the Bridezilla (my most famous character), Janene the Cruise Ship host, Taylor Tyler the host of What the Fuck is she Wearing? and Jane Dough the baker. There are some new songs and twists and turns so any fans of my shows will get some surprises.

It was in a room in a pub with my comedy partner at the time, the wonderful Beth Vyse. We played two TV hosts doing a terrible daytime TV show. I was so nervous – it was just 5 minutes but felt like an hour. I got the buzz afterwards though as it went well. I wonder if it had gone terribly, if I’d ever have had the nerve to get back on stage again!

Not rituals I guess, just habits. I tend to pace a lot because of nerves and I often try and very quickly practice the way the characters stand and move, and their opening lines. Sounds weird but once I start standing or moving like them it makes it easier to become them once on stage!

Best review was a Broadway Baby review for my wedding show in which the reviewer (who I didn’t know was a reviewer at the time as he wasn’t writing notes) had been roped into playing the Best Man and had to wear a Unicorn’s mask for the last 20 mins. His review said ‘This is the best wedding I’ve ever been to”. I was mortified that I’d made a reviewer do that but he loved it!

Worst one for various reasons was for a preview of my first solo show – from something called Remote Goat in which she said “Morris would work way better in a sketch group and shouldn’t be solo” – but it was first published with four stars which I thought was odd. Then two hours later it dropped to three stars but I’d already shared the stars so I had to complain. I think they then removed it! It made me more determined to prove her wrong!

I don’t check reviews anymore because it just makes me stressed. I prefer to check at the end of the run!

I I’ve not seen it nor do I know the law or details so hard to comment.

I think Comedians have the right to choose any subject they like. They obviously just have to be very careful how they approach it and think about what point they are trying to make.

Oh yes I have probably made a dark joke within a weak context and offended someone. I do take feedback seriously and if someone comes up to me afterwards and complains I’ll listen and I will take it on board. I might not agree or change it but I will take some time to reflect. Comedy is subjective and I do characters so often a joke will be to illustrate an aspect of the character – but if I get the context a bit wrong or not clear it can land badly so I do take care!

I think it was the first time I went solo and performed Georgina the Bride. I had written it that morning, had it on a piece of paper and scrambled together a wedding outfit (a white dress and a bit of netting to use as a veil). I was so nervous but I did it and the response was amazing. I had a little buzz when I came off stage and a good feeling that it was the start of something important!

Find Anna Morris on the web - 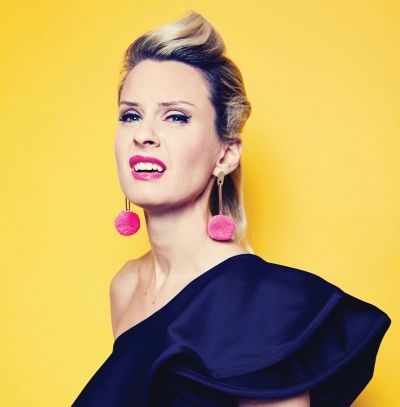 Find Anna Morris on the web -

I do find some reviews are very badly written – ones that basically just describe the entire show in detail (giving away twists) or ones that are very snobby and nasty. There is just no need for it!