The show is me trying to re-assess all of my emotional relationships, following my escape from an abusive partner. It’s funny.

My first gig was in Derby, at the Blessington Carriage. I was 15 years old. The audience were so, so nice to me, and I must have been awful. (I think I made a joke about Australian women with hairy legs – 2008 was a very different world). It was a competition-type show, and I got through to the last bit. I was completely hooked.

Use the toilet, go over the material, try to think of jokes based on the room and what’s already happened at the gig, snort copious amounts of ‘gak’.

Ah, my best and worst review are one and the same. I had a reviewer come in to my show, put his feet up on the front row (I had a small audience that day), text during my show, talk to his friends, not pay attention, then write a slating review of me (in which he seemed angry I had made a joke about the Sims. You know, that tedious, well worn, hack-since-the-80’s topic the Sims videogame). I wrote to his editor after a friend told me he did this at another person’s show and the review was pulled, but better yet, he emailed me to apologise. In fairness, he did seem sincere in his apology, but if you are reviewing your behaviour as an audience member should be immaculate.

If they genuinely care about comedy, I have no issue with any reviewer, they are people expressing their opinions. You can tell when a comedy reviewer has contempt for the art form, or thinks it’s beneath them. Those reviewers can get screwed.

Thanks for throwing that hot potato into my lap. It’s not for me to judge if it was a criminal offence, that was for the judge to judge (judge). According to that judge, he did, which I think sets a dangerous legal precedent, and the law works using precedents. The judge also said he wasn’t taking context into consideration, which is ludicrous. In my opinion, since you’re asking, context is everything, and jokes in and of themselves should not result in prosecutions. If Meechan (who is an unfunny shit-stirrer) did what he did in a Synagogue, it becomes a different thing. It is worth reading up on how real Nazis are using jokes these days, but prosecuting people for jokes is not a place we want to be, as a society.

No, it’s all dependent on context. Also, what people find offensive is hugely variable, I find loads of things offensive very few people seem to agree with me on, and don’t care about stuff other people get nervous about. I’ve seen people walk out of a comedy show for really stupid, strange reasons, such as the mere mention of the fact there was a second world war.

Yeah, if you’re exploring a dark area, you should do it with care, both in terms of what you’re saying and where/when you’re saying it. I have been careless. Dead kid jokes as an open spot, that sort of thing.

I do a comedy game show set in hell, Hell To Play, and the first year we did it was plagued with disaster, I had to replace the whole cast, we never previewed it – this thing I had invested in so much looked like it was going to be nothing but a chore. After an ok first show on the Saturday, we did some tinkering and on the Sunday not only did the show work, it worked well. Properly well. The relief, pride and joy probably made it my best gig.

Find Alexander Bennett on the web - 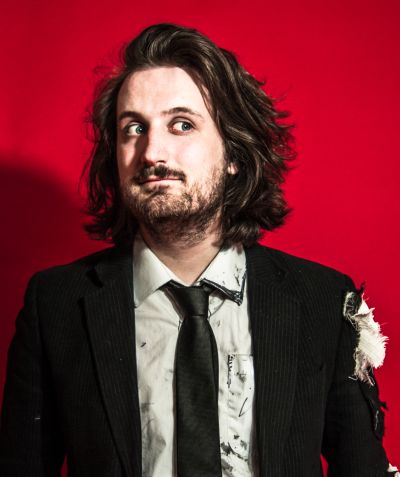 Find Alexander Bennett on the web -

If they genuinely care about comedy, I have no issue with any reviewer, they are people expressing their opinions. You can tell when a comedy reviewer has contempt for the art form, or thinks it’s beneath them. Those reviewers can get screwed.