Against the advice of friends, peers, and anyone of sound mind, I have decided to let a six year old child write my Edinburgh show for me. She writes it and I perform it, Sounds simple right? Wrong, she can’t focus for more than 30 seconds, she can’t spell, and she mainly wants to write a show about the characters from frozen just hanging out for an hour. The show follows the trials and tribulations of this unusual creative partnership as well as showcasing the weird crap she’s written.

It was with the sketch group that I’m part of (BEASTS). We performed to 8 people in a workingmen’s club in Bethnal Green, suffice to say the 10 minute long sketch we had written about the patron saints of the British Isles at a networking event was received with mild disinterest.

Best review would probably be the first 4 star review I ever got. It gave me a huge feeling of relief that at least somebody thought I was good. Worst review was 2.5 stars, it’s so depressingly average, just give it 2, or 1, I’d rather somebody hated my show than thought it was just ‘meh’

Yes, I am self produced so I don’t have somebody to read them for me, I have to read them all and find the good ones to put on my posters and flyers. Also I’ve had enough good and bad reviews over the years to know that it’s just one person’s opinion, you can’t please everyone.

They are a necessary part of the fringe, it’s very easy to be negative about them, but ultimately we’re all trying to convince them to come see our show, so we can’t we be upset if they don’t like it. They’re like bees, you need them, but sometimes you get stung.

Ok wow, I was not aware of this. I think comedy has changed over the past decade or so, people used to find it funny to just try and say or do the most offensive thing they can think of, it was considered hilariously ironic to pretend to be bigoted when you’re not. But times have moved on, and I think it’s for the better, this kind of humour just lets bigots hide in plain sight by pretending it’s a joke, when really they are just being offensive, and preserving out dated and hateful ideas.

No, you can make comedy about anything, however there are subjects that you should be very careful with. It’s all about context and ownership. I’ve seen shows that make jokes about racism, suicide, dementia and other difficult subjects. Some of them have been inspirational, moving, and hilarious, Others have been offensive. You need to think before you start writing. Am I the right person to be talking about this subject? Am I speaking from personal experience? What point am I trying to make? If I upset people can I stand up and defend my work by saying there was a good reason for me to joke about this subject? If you can answer all these questions positively then yes you can make a comedy show about anything.

Yes, I did a section in one BEASTS show where I played Nelson Mandela, in the final show I think that section was well judged and funny, whilst still being respectful. However there was one preview in London when we were still testing things out where it crossed the line and became offensive. I was mortified, it was a real lesson in thinking about what you’re presenting on stage, because you can’t take it back one you’ve done it.

Bestival. I was performing with Beasts on the Sunday of the festival, it was in an open air amphitheatre to about 500 people who were all in various stages of intoxication, the atmosphere was amazing, everyone was up for a good time, it was genuinely the most fun I’ve ever had on stage.

Find Owen Roberts on the web - 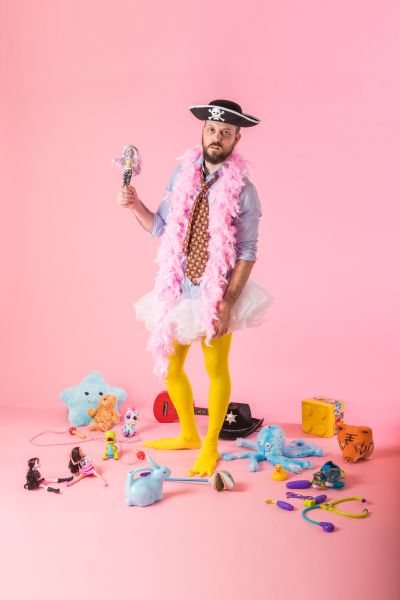 Find Owen Roberts on the web -

Best review would probably be the first 4 star review I ever got. It gave me a huge feeling of relief that at least somebody thought I was good.