As if living in The Tower of London wasn’t special enough, I’ve just been made ‘The Honourable”. As you do. Not by my own merit of course, my dad’s just been made a lord. I don’t feel like it’s a title that particularly suits me, I’ve been sacked from Weatherspoon’s twice. So the show is about me trying to figure out what being honourable really is.

A long time ago I was working behind the bar and a club. A comedy night was put on. Id always wanted to do it and so I asked if I could have 5 min between the acts. They said yes. Looking back I can imagine how annoyed the comics must have been coz I was taking up time and making them have to stay later. Anyway, I went on and did a load of jokes that id got off the internet. When I asked the comics for any tips they all said “You should write you own material”. I thought ”you write your own?’. I had no idea

I always stretch off like I used too before rugby matches. Helps me get in the zone. Also, I jump around a lot on stage so I think it’s just sensible.

There was a review that annoyed me from last year. It essentially bashed me for being a Tory, despite me having absolutely no political leaning at all in the show. I think what happened is the reviewer had seen that I was talking about being posh and wore chinos and so had labelled me as something he hated. My best review was undoubtedly the Daily Telegraph. They were super kind and it was definitely responsible for me selling out the run within the first week. I get the feeling the audience definitely were Tories.

Oh yeah. I get the argument as to why you wouldn’t, but I’m far too interested in what people thought of the show

In my experience they can help you massively. On the other hand a bad review can cripple you. People say it’s just one person’s opinion. Well, yes, but it’s an opinion lots of people will see. It’s all part of the game.

The problem with what he did was that the joke wasn’t strong enough to justify the deliberately shocking premise. What I found more offensive was the fact he is labelled a comedian. He doesn’t do the circuit, writing actual routines. Uploading 15 second YouTube clips doesn’t make you a comedian, in the same way if I decide to cook a meal it doesn’t make me a chef.

I don’t think any subject is off topic. Having said that, you have a responsibility as a comic to judge what themes are appropriate for what situation. If you’re going to tackle taboo subjects, you better make sure those jokes are good enough to justify that.

Absolutely. Going too far is going to happen. You have to figure out the boundaries by crossing them. Its mainly getting annoyed by people talking then shutting them down but realising you haven’t put any humour in it. With my old group, we once sang a song to a bride on her hen do, went too far and ended up with a crying woman on stage. It was awful.

I did my first solo tour this year. It’s a big moment having left my group and wanting proper validation. the Soho London run was a really rung in the ladder of my career. first night I remember walking out and all the Beefeaters fans their family had come along from the Tower. That was quite a feeling.

Find Tom Houghton on the web - 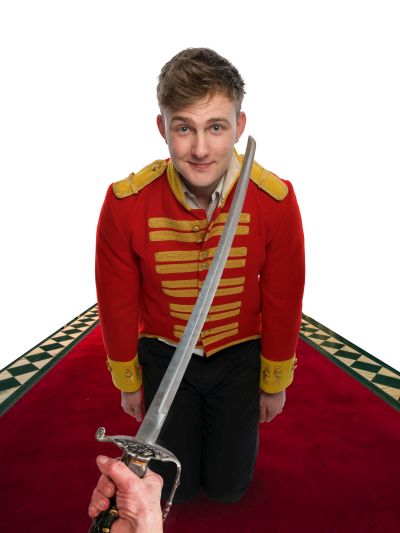 Find Tom Houghton on the web -

There was a review that annoyed me from last year. It essentially bashed me for being a Tory, despite me having absolutely no political leaning at all in the show. I think what happened is the reviewer had seen that I was talking about being posh and wore chinos and so had labelled me as something he hated.