this is an article from 2017What the Bruce?

This article was first posted on Monday, August 7th, 2017 Filed by Mister Kipper

The Edinburgh Fringe is 70 years old this year. Veteran comedy critic BRUCE DESSAU remembers 3/7ths of it. At least, he remembers the really odd stuff.

I’ve been visiting the Edinburgh Fringe Festival since 1963. In the early days there were six comedy shows in the programme, which was printed on vellum and hand-delivered to critics who were ferried from show to show on sedan chairs carried by theology students from Edinburgh University. Hog roasts were served in journalists’ rooms at the end of the day – around 4.30pm.
OK, that’s not quite true. Occasionally we finished at 5.30. Seriously though folks, I’ve been going since the 1990s and it has changed. Comedy now dominates Edinburgh in August. Critics have to struggle to squeeze in as many shows as possible. At least we don’t have to worry about finding time to eat between shows. We can’t afford to eat these days.

Here’s a shocking stat. When Arnold “Why Not?” Brown won the Perrier Award in 1987 – the first bona fide “alternative comedian” winner (it was mostly clowns, wannabe thesps and Stephen Fry until then) – the judges only had about 40 shows to choose from. It was a joint act with musical duo Jungr and Parker. I’m not sure if a joint show would be eligible today, but there was less to choose from then so maybe the rules were baggier. (You don’t expect me to do proper research on Fringepig’s rates do you?)

There have been calls to limit the Fringe, but as one venue closes more spring up, whack-a-mole-stylee. There used to be a joke that any space in the city would be used as a venue. Even the toilets. This was officially no longer funny when in 2015 Paul Ricketts performed Now Wash Your Hands – Again! in the public loos of the Pleasance, Gilded Balloon, Assembly and Underbelly venues.

I digress. Fringepig has asked me to show my age by writing about some of the weirder acts I saw in my youth.

The trouble is, as they say, if you can remember the 1990s Edinburgh Fringe you probably weren’t drinking as much as you should have. I can remember more about events in the Assembly Rooms bar – someone now famous in a scuffle, Bob Mortimer telling me he’d just seen a brilliant new comic called Tim Vine – than events onstage.

This was an era when little was filmed, so on the plus side little now clogs up YouTube. Most shows were like mayflies. Perhaps that should be Augustflies. If they didn’t get a Perrier nomination there was no tour after the Fringe. Posters were binned and the acts started work on their next show. Repeat on an infinite loop. 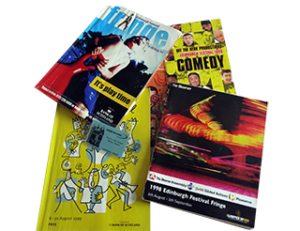 Picking up a nomination was no guarantee of stand-up success either. Johnny Immaterial was Perriered in 1993. He used to do a marvellous Kenneth “Ooh matron” Williams impression. The following year I saw him perform to only a handful of people at the old Gilded Balloon in Cowgate. He later became celebrated children’s author Jonathan Meres and only gets heckled by 4 year olds now.
Having just ventured into my attic – yes, I have an attic, is that so wrong? – I’ve found some old paperwork that might jog my memory.
Ooh look, here’s a printout of Fringe contacts from 1992. David Baddiel and Rob Newman are sandwiched between Bablake at Buster Browns and The Bastinado Theatre Company. I also found an undated press release from Jongleurs, announcing that they are planning “to create the UK’s first fun portal”. Whatever happened to jongleurslife.com?

Harry Hill is on the list and his press contact is…Harry Hill. I might call him in a minute. Remember 071 codes? Spangles? There are dead people on the list. Late stand-up head honcho Addison Cresswell is PR for Jack Dee and Jo Brand. There are seven different Cambridge University shows. In 1992 the list only runs to 11 pages. Today it is bigger than Wikipedia.

Talking of comics-turned-authors (remember Johnny Meres a few paragraphs ago?) Edinburgh audiences – and judges – don’t always spot talent. I saw unknown duo Matt Lucas and David Walliams try to maintain their dignity in front of indifferent audiences at the Assembly Rooms in 1995. Walliams thought it would be funny to put “Free creche” on the posters. One woman didn’t get the gag, turning up with a baby. The show was at midnight.

I’ve just found a Fringe programme from 1998. The pictures are black and white and look like they were developed at Snappy Snaps. Ed Byrne seems spotty, Dave “I, Daniel Blake” Johns has hair and a quartet called the Universal Grinding Wheel – where are they now? – have a goofy member who thinks he is the new Vic Reeves. The Independent on Saturday – where is it now? – called them “crucial”.

I do remember the Trachtenburg Family Slideshow Players. They were a mum, a dad and their 10-year-old daughter Rachel, and they performed songs inspired by vintage slides they had found in junk shops. I guess you’d call it outsider art today. Back then it was just a typical Fringe show. I wrote that they were a cross between The White Stripes and The Krankies.
It’s at times like this that the internet justifies its existence. I’ve just sparked up the wi-fi – yes, I have wi-fi, is that so wrong? – the band split and Rachel is now a “musician, singer, actress, model, former radio host and activist”.

I’ve not heard much lately from The Two Wrongies, who did a synchronised swimming sketch naked except for nose clips, goggles and caps in 2011. But give them time.
I’ve got a tatty leaflet from 2005 promoting Dutch Elm Conservatoire. You may not know the name if you are under 30 but members included Dan Renton Skinner (now Angelos Epithemiou), Jim Field Smith (now film director), Rufus Jones (all over stage/TV comedies like a rash), Stephen Evans (you’ll know his face) and Jordan Long (lots of films – check imdb). There is also a small ad for a show called House Party. It stars Miranda Hart.

So don’t give up. Stick around long enough and you too could be a superstar.

Bruce Dessau is editor of beyondthejoke.co.uk 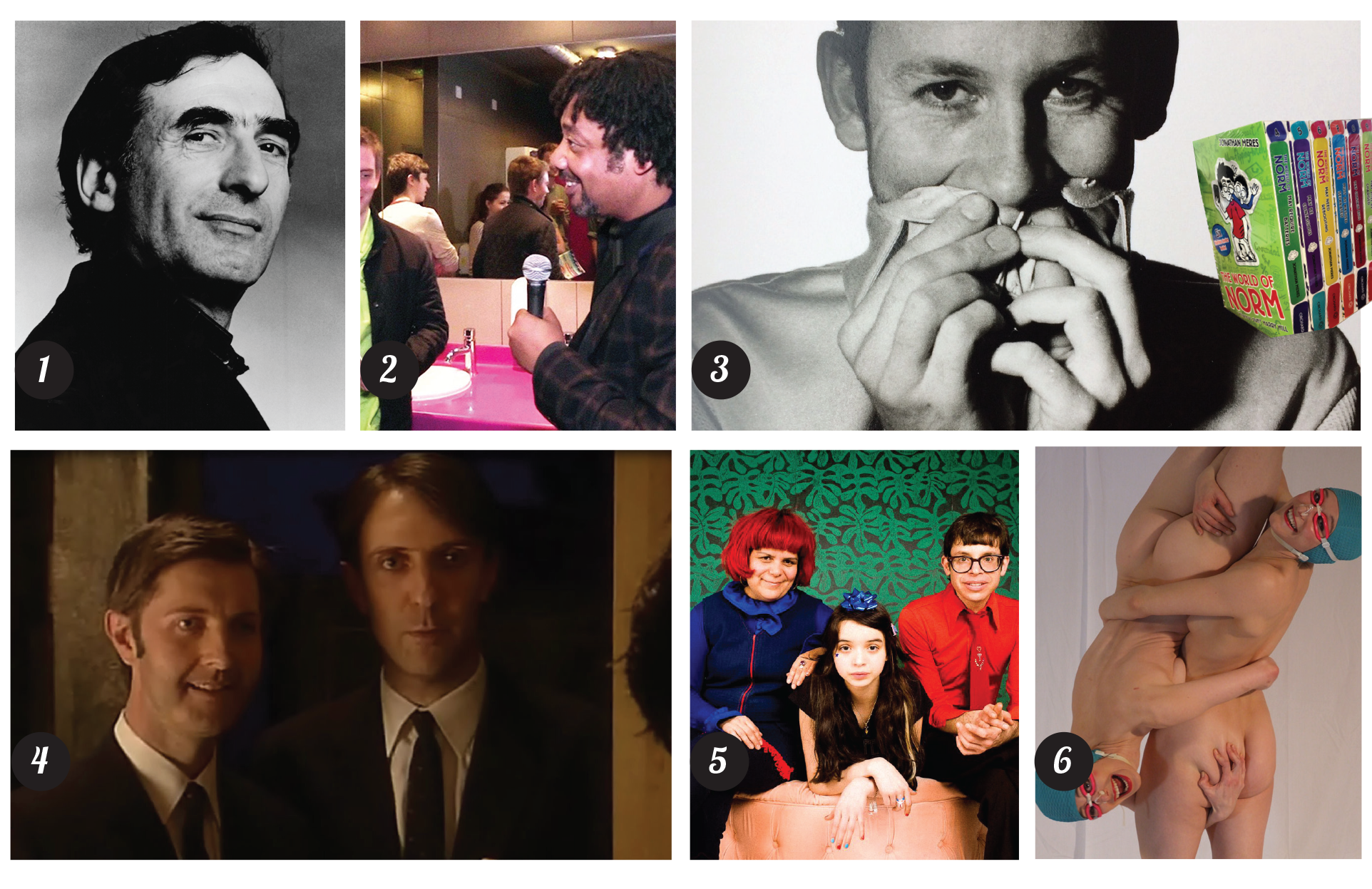 1. Alternative comedy at the Fringe may have started with Arthur Brown, who won the Perrier award in 1987

5. The Trachtenberg Family Slideshow Players, with all the glamour of a struggling Oxfam shop, were difficult to dislike in 2007. But the little girl is now 6ft 3 and an arsonist. (not really) 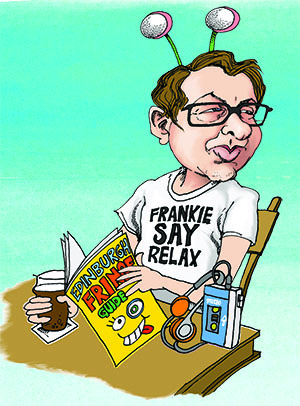