We’ve been told to make the show about our upbringing in bleak backwater towns – so it’s kind of like little sketches and characters but all filtered through our warped provincial sense of humour (instead of the usual upbeat, private school fare you get). Lots of fake blood.

It was actually just 15 minutes we cobbled together to host a charity night. Jack (the taller one) tries to satisfy his massive liberal guilt complex by working for a lovely organisation called the Harinder Veriah Trust, which raises funds for two girls’ school in an impoverished region of Malaysia. So we thought we could put on a comedy show to raise money, and we did some nonsense at the top that seemed to go down okay. Sketches included one about the Monopoly man instigating a Donald Trump-style political coup against Woody and Buzz in Andy’s room. Never been performed since, thank you very much.

We have never done a gig without the projector having some kind of meltdown just before the show start, so that’s something of a ritual now.

A particularly scathing one from Bruce Dessau which said our white boiler suits were the most memorable thing about us. Pretty harsh given this was for an amateur sketch comedy competition final, in the first few months of working as an act – it’s not like we’d asked him to be there, and it’s not like he needed to pronounce that kind of judgement on us; we didn’t win and he could have just said something nondescript or neutral. That said, Chortle said we were good based on the same show, so I retract everything.

I think so – obvious bitterness aside, reviews are feedback. Even negative ones, once you’ve kind of gotten over the shock of them, do just inspire you to go away and be better. That Dessau one just made me really want to improve and develop the act. There’s a great Steve Martin quote: “Be so good they can’t ignore you”. Very American Dream-y but we cling to it.

Most of the time I say fair play to them. They’re only trying to earn a crust, and bad reviewers and reviews don’t last, ultimately. There’s a tide of opinion that’s much, much bigger than critics, and it’s important to remember that when weeping over your 2-that-reads-like-a-4 from Fringefudge.nz or whatever.

I don’t know whether it’s a criminal offence, I’m not a lawyer. But I object to it hugely for being distinctly unfunny – animals do spontaneous funny stuff all the time, but the joke of ‘look at the incongruence of this dumb animal doing a political thing’ is lost if you’ve spent countless man hours forcing the dog to do it, surely.

I really don’t think so, but I’m possibly naive and privileged enough to not feel threatened by most jokes on most topics. It’s always about the joke itself I reckon – but have no doubt there’s folk out there who feel genuinely intimidated by certain kinds of joke getting laughs – and it’s all well and good me saying: “oh, don’t worry – over time, sound judgement will prevail and only the truly good jokes will be remembered”, because they want change now, which is fair enough. But I think it’s definitely possible to have good jokes about a controversial topic, particularly if they’ve been designed to poke fun at the right people.

We actually don’t have any swears in our show, but we do have some gore and violence – so we’re an odd mix of clean-cut and dark: like Itchy and Scratchy or something. I occasionally worry what effect our more violent skits would have on someone who has had experience of being physically attacked. But again you surely just have to say it was in the service of a joke which wasn’t aiming to mock them or ‘punch down’ on them. Which I don’t think our jokes do. Honest.

Horribly, it was probably our first gig doing that charity event. Almost everything landed, and we often had to stand around waiting for people to stop laughing. When you’re trying something for the first time, you do it so innocently and genuinely that audiences pick up on it and trust you, and enjoy what you’re doing. On the Time versus Acclaim graph, there really is a ‘beginner’s luck’ spike at the early stages of an act I think – followed by a horrid valley of mediocrity when you start to overthink things, become derivative, until you finally work your way back to the calm stage presence you had on your first go anyway.

Moon was talking to Wrigley Worm.

Find Moon on the web - 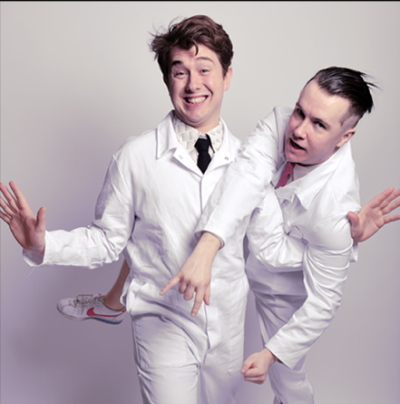 Find Moon on the web -

There’s a tide of opinion that’s much, much bigger than critics, and it’s important to remember that when weeping over your 2-that-reads-like-a-4 from Fringefudge.nz or whatever.