My show is called Fitting Image. It is about finding your own identity when people have an image of you in their heads and you’re doing everything to live up to it. I was given the roadmap to my life at birth, I should know who I am and where I am going, yet every day I feel like I need to sort my life out. This my story about fitting in and chasing big dreams despite having very long toes.

My first gig was in the Netherlands. I was such a newbie, I had no clue what I was doing. Instead of doing a low key open mic, I did an 8 minute open spot in a pro show. I wanted to vomit so badly, right up until the point where I went on stage. I was very focussed on remembering all the lines I had written. I thought I was doing ok, until the first proper laugh. I was so shocked that people were laughing that I forgot the next 3 jokes. After the gig I was incredibly hyperactive, it was the best thing ever. I did another spot in that same show the next day, so it must have gone ok.

I like listening to music on my way to the venue. I make sure I arrive on time so I can have a feel of the room and I write my set list. I like being in the room during the entire show and right before I go on I do some jumps and stretches.

My best review was in the Netherlands when I won a competition. The review said I was frank, fearless and funny. The worst review was only a few weeks after that. It said that as a woman I was treading dangerous grounds by attempting stand-up comedy and that I was using too much bad language for a lady.

I’m planning to read them, but only in the morning and I’m not allowed to worry about them after lunchtime. I think otherwise they’ll drive me mad!

I think reviews are very useful. I’ve gone to shows that I might have completely missed out on if I hadn’t read a review about it. On the other hand reviews are also the opinion of just one person on a particular day. I’ve seen shows with bad reviews that I thought were brilliant, but also seen shows that had great reviews and were completely not my thing. I think in the end it’s all about finding the shows you like and make up your own mind about them.

Yes, it was offensive and discriminating. Personally I don’t find it very funny and quite pointless. I’m not interested in comedy that is just being made for the purpose of being offensive.

I think any subject is suitable for comedy as long as the subject is handled with respect and it is done by the right comedian. I tend to disengage when people just talk about a subject in order to be ‘edgy’, but the subject doesn’t really apply to them personally and I’ve more than once experienced people really missing the mark because of this.

When I just started out I did a lot of self-deprecating material. I still think self-deprecation is a great tool for comedy, but you have to keep in check where your line is. In the beginning I was quite cruel to myself in order to get a quick laugh and in this respect I have sometimes gone too far.

My best gig was my So You Think You’re Funny heat in Brighton in 2015, some of my friends and family had come over to see the show. I injured my knee that day and I’m not sure if it was the painkillers or not, but I felt like I had wings on stage that night.

Find Lisanne Fridsma on the web - 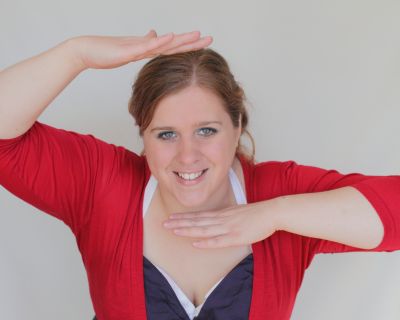 Find Lisanne Fridsma on the web -

My best review was in the Netherlands when I won a competition. The review said I was frank, fearless and funny. The worst review was only a few weeks after that. It said that as a woman I was treading dangerous grounds by attempting stand-up comedy and that I was using too much bad language for a lady.