It’s called, Jo Caulfield – Killing Time. There’s no bells, and no whistles. It’s an hour long pure Stand-Up show where I’ll be talking about relationships (how they change over time, and overhearing my Scottish husband giving his nephew advice about how to deal with women!); my personal life (everything that’s annoyed me in the last 12 months) – and double standards in the media (promiscuous men v promiscuous women).

Basically, it’s a Celebration of Anger.

I went to see a friend do a 5 minute open-spot at the Comedy Store. And even though he died on his arse I was hooked. The following day I went through Time Out Magazine, where all the comedy club were listed, and booked myself into a couple of open spots.

I had no idea how to write jokes. I just scribbled down half a dozen things I’d said at work that made friends laugh.

My first gig was the Wednesday night New Act competition at The Comedy Cafe, Old St, London. Before the show I was so nervous I ended up getting drunk. I have no idea what I said onstage. I don’t even remember being on stage. But I won the competition.

That makes me sound like I’m a natural. I wasn’t. I was dreadful – but I must have been slightly less dreadful than everyone else on the bill that night.

Luckily I knew so little about comedy I was under the delusion I was quite good, so I kept going. The truth is I wasn’t even good enough to know how bad I was.

That’s what happens in the beginning. At first your excitement and enthusiasm can win over an audience. It’s like any job; they let you off for a while because you’re new but eventually they get pissed off that you still don’t know what you’re doing.

I sit quietly, run the show through my head, try and get my mind into the zone. I only drink coke to get the sugar and caffeine hit, never alcohol.

Beyond that, it’s the usual: I put my football boots on last, and always stand behind the goalkeeper in the tunnel.

The best was a personal review from Chris Rock. He saw me at the Comedy Store in London. Afterwards he introduced himself (like I didn’t know who he was!) He told me what he liked, why he liked it and what he thought I could improve. Everything was positive and encouraging. To have Chris Rock quoting my lines back to me was mind-blowing. I’ve never done heroin while driving a stolen car but I imagine that is what it would feel like. Just the fact he took the time to do that showed me he loved comedy and was happy and to help/give advice.

The worst was a review where the reviewer devoted several lines to criticising my audience and, specifically, their age. What an agist wanker! Being ageist just shows your own ignorance of life. That magazine with it’s pre-conceived opinions can fuck right off. They’re not getting any free tickets this year and I won’t be paying for an advert in their shitty little Time Out-wannabe fish and chip wrapper.

Anyway I would imagine that rag won’t be around in 12 months time because print is dying. What a fucking tragedy. Said no-one.

I will dance on the grave of their “careers”.

No. I stopped reading reviews 5 or 6 years ago. The audiences reaction (or lack of reaction) tells me everything I need to know.

The bloke who runs my website reads them and passes on anything he thinks I might find interesting. He is always wrong.

I like Martin Walker (Fringepig) because he gets me football tickets, has an amazing of knowledge of hi-energy disco and enjoys swapping malicious gossip. It’s always bona to vada his dolly old eek.

I like Gayle Anderson (The Herald) because she talks about gender politics and used to write the Dear Claire problem page for Jackie magazine.

I like the bloke from The Wee Review because he lives round the corner in Leith, *rocks* a pair of great Hipster sideburns and his day job is working for an amazing organisation that helps people deal with grief.

I like Geoff from One4Review because One4Review is obviously a labour of love, plus he tries to see the positive in every show and be encouraging.

I like Bruce Dessau because he looks like the singer from the Manic Street Preachers. Years ago I bought a book he wrote about Billy Connolly. I’m definitely going to try and finish the first chapter some day soon.

I like Steve Bennett from Chortle because he always offers to buy me a glass of wine, and he reminds me of my favourite character in “Rainman”.

But most of all: I like George Manning from the Comics Review Online  because he doesn’t exist, and neither does his website.

I’ve met a lot of the ‘credited ‘professional’ reviewers and I’m always surprised how unfunny so many of them are in general conversation. I’m not being bitchy. I really mean it. When you’re sitting having a drink with a group of people everyone’s always joking or making funny remarks… They never seem to make genuinely funny remarks, they just re-tell things that comedians have said. I enjoy my conversations with Stewart Lee face-to-face, I don’t want a verbatim transcript of his show when I’m in the pub.

I’ve met a couple who tried their hand at Stand-Up, and failed. I always think they’re carrying a bit of a *subconscious* grudge/chip on their shoulder that they couldn’t succeed at the thing they’re criticising.

I met another one recently who was SO intense! All he wanted to do was tell me what Stand-Up comedy should be about, how it should be done and where most comedians were going wrong. When I suggested he get up on stage and put his theory into practice he looked at me as if I’d just pissed on his head.

Basically, I like reviewers who don’t talk to me about comedy. I have professional comedian friends for those conversations.

I couldn’t care less. Personally I would have had the pug put down because I don’t like pugs. Beyond that I never gave him or his video much thought. If his *cause* hadn’t been taken up by a man ‘off-the-Telly’ I don’t think people would have bothered to rally round.

I’m too busy working. I’ve got no time to defend Markus Meechan, Dapper Laughs, Jim Davidson, Bernard Manning or any other comedian. If they want to “do their thing, fine. Get on with it.

Some people will disagree with me but hey, that’s the whole point of freedom of speech.

No. Every subject under the sun can be tackled by poetry, film, dance, music, sculpture, theatre, painting, comedy, whatever art-form you care to name.

Yes. On last years “Bad Motherfuckers Tour” me, Doug Stanhope, Sam Kinison and Paul Sinha got wasted on cheap crack and bathtub gin. I performed two illegal abortions in Peterborough, Doug kidnapped a nun in Doncaster, then shot her in the head. I thought it was funny but Sam pussy’d out and insisted we give her a decent christian burial. Paul Sinha came 2nd in the pub quiz.

Right… it was “Holy Holy” two years ago at the Shepherd’s Bush Empire in London. They’re a  fantastic All-star David Bowie tribute band, each member has either worked with or been massively influenced by Bowie’s music.

Woody Woodmansey (original Spider From Mars) was on drums, Tony Visconti (Bowie/T.Rex producer) was on bass, Glenn Gregory (Heaven 17) on vocals, James Stevenson (The Cult/Generation X) on guitar, Steve Norman (Spandau Ballet) on saxophone, Marc Almond (Soft Cell) got up and sang “Oh, You Pretty Things” and “All The Young Dudes”, the venue was packed, the sound was amazing… Oh, wait! You mean “me”? The best gig of “my” career? The best gig “I’ve” done? That’s easy — all of them. I’m really good at what I do. I’m pure-fucking-class.

Find Jo Caulfield on the web - 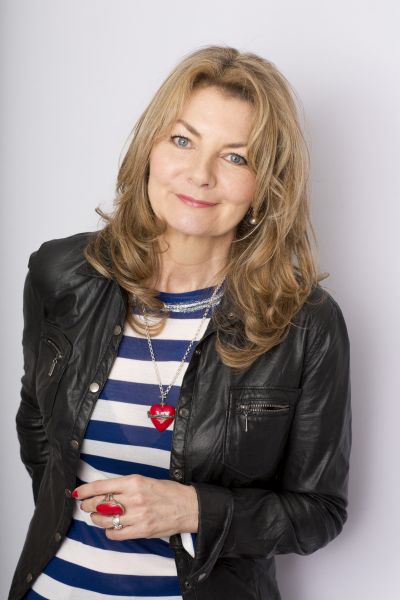 Find Jo Caulfield on the web -

The best was a personal review from Chris Rock. He saw me at the Comedy Store in London. Afterwards he introduced himself (like I didn’t know who he was!) He told me what he liked, why he liked it and what he thought I could improve. Everything was positive and encouraging. To have Chris Rock quoting my lines back to me was mind-blowing.