We have tried to be more ambitious with our show this year, we wanted to be more hands on with our audience this year while still maintaining the style we have been developing for the past 8 years. The show sees us take the audience on a trip around the world, meeting tonnes of weird and wonderful characters in strange and bizarre situations; there’s even a musical number from the Great Wall of china.

Our first gig was in Edinburgh actually. We made a show together at university in 2009 and hadn’t even heard of the idea of previewing then so just took it to the hive (before it was cool) we ended up having a blast and have been coming back every year since.

We’ve picked up a load of injuries over the years from our shows. James has a slipped disc so he always has to warm up his back, John’s voice tends to blow out so he has to steam before a show and I dislocated my jaw and shoulder on stage before so now have to make sure they are loose and limber.

Isn’t it funny that we have been lucky enough to receive plenty of great reviews and I can remember a specific best one but we have had two bad reviews and I can almost quote them word for word. In 2010 a ‘whatsonstage’ reviewer hit us incredibly harshly at one point saying we wore “presumingly ironic tshirts” when at the time we just wore our own clothes.

Every year we say we aren’t going to read the reviews and last year was the only time we genuinely didn’t and it’s so much better for your show and mental health. Even reading positive reviews can spoil things, if someone tells you a moment is great you start over egging it and it’s ruined.

I have really mixed feelings about reviewers. On the one hand a good review can really help get people to your show which is really handy. On the other hand comedy is subjective so I think it can be very damning to call a show “bad” instead of saying “it wasn’t for me”.

A criminal offence, no. A dick move, yes.

I think in theory there are no subjects that are off limits but that doesn’t mean you shouldn’t be aware that the things you say can cause harm. “It’s a joke” isn’t enough of an excuse for something’s so unless you can really back up the point of the joke then get prepared for justified backlash.

We aren’t really that kind out act. I once lashed out a bit at a heckler who was shouting out a lot in a show. Even though it was positive shouting it was breaking up the flow of the show so I shut him down. I felt a bit bad at the time but after the show we had a beer and spoke about it and it was all good.

We have had so many strange gigs. It’s tough to know what the best one was. We once turned on the Battersea Christmas lights to a sea a few thousand school kids. We thought we would do a countdown joke that went “3..2..1.. 5 more seconds!.. 5..4..” it did not go down well at all but I’ll always remember that we did it.

Find Sleeping Trees on the web - 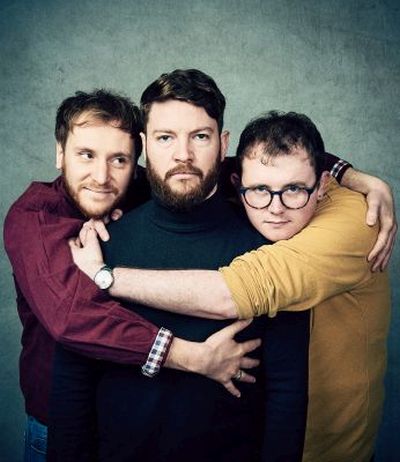 Find Sleeping Trees on the web -

In 2010 a ‘whatsonstage’ reviewer hit us incredibly harshly at one point saying we wore “presumingly ironic tshirts” when at the time we just wore our own clothes.