Well I’ve kind of learned to let the subject emerge naturally, rather than impose one from the beginning. So far though it seems to be about my Australian boyfriend and our long-distance relationship. That and going to therapy as a child. Oh, and shitting myself, it’s also about shitting myself… maybe it’s about not being in control?

My first gig was in a ‘controlled’ environment. Basically, it was me and a bunch of other first-time acts, so the audience knew it was going to be shit. I had about three of these gigs before my first proper one at the Stratford Theatre, where I got booed off for calling someone a cunt.

I usually make a few faces in the mirror to stretch my face out. I also tend to do a wee shimmy and an impression of my mum, to get my body and voice ready for act outs.

I think my favourite review would be one I received from Chortle a couple of years ago. It had no star ratings but said my show was a mixture of “being daft and being a smart aleck” which is what I’ve been going for.

The worst review was from The List magazine. It was two paragraphs long and gave me two stars. The first paragraph went on about the show title, which was ‘Scottish Comedian Of The Year 2013’. The reviewer thought this was clear evidence that I was coasting on former glories. What they didn’t know was that part of the deal when I won was that I would do a 45min show with this title in exchange for a free fringe run. He also said it was basically not a good show.

I don’t plan on doing it, but I will. I know it. My paranoia will drive me to it.

Perhaps reviews are more necessary now than ever, to separate you from all the other stuff that’s on. It’s not an easy job. You can’t get it right all the time. Saying that, some reviewers are just pricks that like feeling in control; more concerned with expressing ‘interesting’ opinions than they are with the actual show. Most I have a lot of time for, though. (He says, after having a good Edinburgh last year)

Not really. It depends on whether the person performing it can make their own experience of the subject funny, which I think can make the best types of comedy routines. My favourite quote is when Billy Connolly said, “Whenever you are vulnerable, you are funny.” He talked about so many personal stories that, if you only heard the subject matter, you would think it couldn’t be made funny. He made them hilarious and some of his best material.

Oh aye, all the time. I try out material in previews for Edinburgh, a lot of which ends up being way too personal. It leaves people feeling a bit funny, like, “We didn’t really need to know that about you,” so I have to tone it down for the Fringe.

Probably my Live at the Apollo set. It was a show I always wanted to do since watching the first series as a kid. Getting to do it and having a good one was literally my dream come true. What was even better was that I had to go back on to rerecord my entrance, as the filming messed up, and the audience gave me an even bigger cheer than before. That was great as I knew then that I’d done okay. I tend to have trouble judging these things; I question my own judgment.

Find Larry Dean on the web - 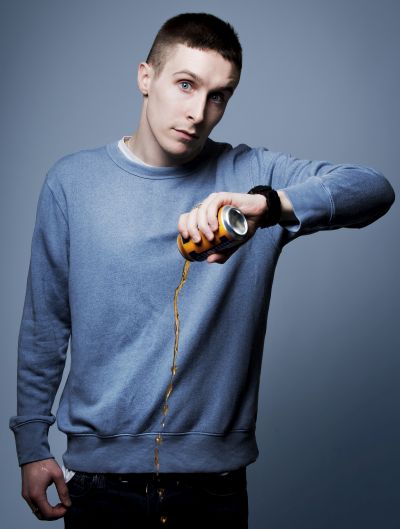 Find Larry Dean on the web -

Perhaps reviews are more necessary now than ever, to separate you from all the other stuff that’s on. It’s not an easy job. You can’t get it right all the time. Saying that, some reviewers are just pricks that like feeling in control; more concerned with expressing ‘interesting’ opinions than they are with the actual show.