Declassified is a mind reading and hypnosis show. Most people hear hypnosis and think people clucking like chickens on stage; this couldn’t be further from Declassified. At the top of the show I make a promise never to embarrass anyone, instead I show people the incredible things possible through hypnosis.

Without giving too much away, you will witness members of the audience perform the inexplicable in a series of superhuman feats. The inspiration for these feats has been taken from a mix of true stories and urban legends, the stories you’d normally hear and think ‘there’s no way that’s possible’. I don’t just tell the audience these stories, they see them unfold in front of their very own eyes.

My first ever gig was actually as a magician. I was 15, I got paid £10 for an hour to go round tables and entertain guests with tricks. I hated it. I still feel sick thinking back to how nervous I was. I’m rubbish at sleight of hand and traditional magic. It took me 15 minutes to pluck up the courage to go to the first table. My pockets were packed full of all sorts of tricks, I’m surprised I could walk with how heavy my oversized blazer was… I learnt two things that day, people don’t really care what you show them as long as they have fun and you entertain them in some way and I was never going to do close-up magic ever again…

Sam Fitton (co-writer & director) & I have a number of pre-show rituals. We adopted one after working with the Men with Coconuts, which is to wish each other a good show before we go on stage and repeat back to one another “this will be a great show”.

If we’re feeling in a little more mischievous mood Sam will often given me an unusual word to try and fit into the show to keep me on my toes, like ‘lettuce’. The goal is to try and fit whatever word it is into the show without the audience noticing… they get wild and weird and it’s always good fun. So listen out in the show if I suddenly say something like ‘that’s great, lettuce begin.’

My worst review typically was a bad review. I don’t mean a bad review of the show (which it kind of was, still 3 stars) I mean it was a pile of tripe, written by what I can only assume was a poorly educated child… I don’t mind a couple of negative reviews of my shows, providing they are well written and constructive, you can take a lot from them to help develop a show. But the particular review in mind basically described the show line by line, essentially giving away the punchlines to the bits, and saying they didn’t like that bit and so and so, could do it better. They ruined the show and didn’t give anything constructive. I was livid and wanted to ask it to be pulled. I almost wrote a review of the review on how badly it was written. I might start doing that…

My best review actually isn’t any of my 5 star reviews, it was a 4 star review from Broadway Baby. The review was incredibly well written and there is such a lovely quote that sums up my show and how people should feel – ‘moments that will make you gasp you won’t stop thinking about’.

I read the reviews of my show every year, for better or worse. I think as a performer it’s important to read the reviews of your work, especially if you’ve invited the press in to review. The reviews can help shape your show, raise points of discussion within the production team about what you agree and disagree with in the review and ultimately help to produce a better show. I think it’s so important though to compare the professional reviews to the reviews by the audience. One reviewer’s opinion in isolation is not something to live or die by, I look at reviews as a whole.

Personally I like reviewers, they’re just normal people who write their opinions for the world to see. Sometimes they like a show, sometimes they hate a show, we all have our own opinions. I don’t like reviewers though who can’t do their job and write bad reviews. By that I don’t mean they didn’t like the show, I mean their review is poorly written, is an account of things they didn’t like or is overly critical thinking that they need to be super critical to make a name for themselves. If someone doesn’t like my show but they produce a well written and well rounded piece explaining why they did or didn’t like aspects, critiquing analytically and highlighting what needs improving in a professional manner then they are much more valuable than a good review that loved the show. If you read a well written review you get a sense of what the show is like and whether you’d like it personally regardless of the view of the reviewer. A poorly written review is a waste of everyone’s time.

I don’t think it’s a criminal offence, but I do think it was incredibly idiotic. Sometimes in the confines of your own creative bubble you can end up down dark roads where you think things are funny for completely different reasons as to why they are such a bad idea.

Not from the right person, humour is subjective and sometimes the thing that makes us laugh the hardest is the foiling of expectations saying something that you know shouldn’t be said but the fact it is, is what makes us laugh. In these situations we are laughing at the fact that it’s been said rather than the subject of the joke. Laughter is great for the soul and providing the joke isn’t a targeted attack designed to humiliate or harm an individual I think the right person can deliver any joke.

My sense of humour in my personal life is quite crude and dark, this often doesn’t come out on stage, it’s censored to be appropriate for the audience. However, in 2012 on stage in my theatre show my quick witted crude self got the better of me and before I could stop myself I blurted out my response. At the time I had 5 boxes on stage labeled me, you, sex, dead and James Bond, audience members were asked to name one at random. I had a 60 year old lady on stage at the time, I asked her to name a box, if she named the one with £1000 inside she could keep it, she said “I’ll take sex please”, I immediately responded “it’s good to know you’re still choosing it at your age.” She couldn’t have blushed more if she tried, I felt horrible, my director slapped his hand against his head, the audience didn’t know how to react… Turns out she was the director of the charity the night was sponsoring. I made a note to myself to pick the time, place and person to make those comments to.

The best gig of my career was actually one I thought was going to be the worst back in my early days of performing. It was for Christian Youth Group Organisation, the Boy’s Brigade’s AGM. I was already dreading it as I had a crowd of 200 people of mixed ages from 15 through to 80, I’d been told I couldn’t do hypnosis because the ‘oldies’ didn’t like the sound of it and my usual inappropriateness and occasional swearing would have to be kept to a minimum. I arrived, already dreading it, to find out everything at the AGM had been blocked and no decisions had been made, it couldn’t have been a bigger waste of time and everyone just wanted to go home, and I had to stand up and deliver a 45 minute show to people who did not want to be there. I walked out on stage and it couldn’t have gone better, by the end people were stood on their chairs cheering, I over ran because more people wanted to see more. It was such an important gig to me because it showed me never to second guess a gig. Before it I went on and said to myself ‘let’s just get this over with’ which is the wrong attitude to have. Everyone left that evening having had a rubbish day turned around and they’ll remember that for years to come. That’s what entertainment is about taking people on a journey to change how they feel.

Find Aaron Calvert on the web - 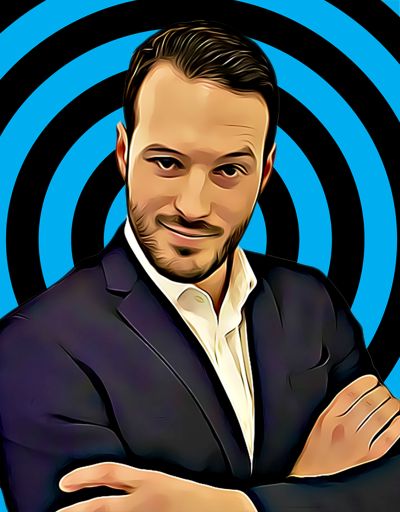 Find Aaron Calvert on the web -

If you read a well written review you get a sense of what the show is like and whether you’d like it personally regardless of the view of the reviewer. A poorly written review is a waste of everyone’s time.