I’d planned to do a straight hour of stand up. No theme or gimmicks. It’s a real artistic challenge to do that. But then a whole tragic nightmare happened in my personal life so I have to talk about that because I can’t think about anything else and the show is in five weeks. So, it’s half the show I wanted to do and then a meta exploration of why I can’t finish that show. I’d promised no politics and no sad stories. But I’m delivering both, in spite of myself. I didn’t want to do an ‘Edinburgh show’ I wanted to tell some jokes. But then fate came over and fucked all my shit up.

These Q&A forms make you feel odd by the time you’re on the fourth or fifth one.

I was flyering for my show a few years ago mid festival. Feeling a bit despondent and sleep deprived. Standard mid fringe crisis point. Then a man bounded up to me and said ‘thats the best thing I’ve ever seen’. I was immediately lifted, this was a real review from a real person, not some bloody critic, a man on the street, a regular Joe. I spent the next three hours positively bouncing around Bristo square talking to people enthusiastically about my show.

Then about two hours later I went to the toilet and realised he had been referring to the ‘Paul Simon Graceland Live in Hyde Park 2012’ T-Shirt I was wearing. And to be fair, Paul had put on one hell of a show and if I’m honest it was better than mine.

Yes. Because I had to purchase a pair of noise cancelling headphones at the cost of £379 to stop myself from having to listen to people talk about it. They may have started talking about something else by now I suppose, I don’t know I was listening to music.

Anyway, yes he’s a fucking criminal and should be thrown in jail or it’s a free speech issue. I don’t care. But B&Ws new PX headphones are outstanding.

Actually, I just re-read the question. If you describe yourself as a ‘YouTube comedian’ you should be thrown in a pit for teaching your dog to do anything other than apologise for what a pointless waste of skin you are.

No. Some are just harder than others. It’s like landing a ski jump. You can do it if you know what you’re doing. It’s just that too often people try a fifty foot jump with a triple back flip on their first trip to ski camp and the results are horrific. That doesn’t mean you should close the slopes.

I recently told an employee of a telephone company that if he had half a brain cell he’d be fucking dangerous and that I’d smack him up the side of the head if I wasn’t morally opposed to animal cruelty. My wife tells me that you can’t talk to people like that. It doesn’t much matter, I don’t talk to anyone anymore. She deals with the household admin now.

End of The Road Festival in 2015 was pretty perfect.

Find Garrett Millerick on the web - 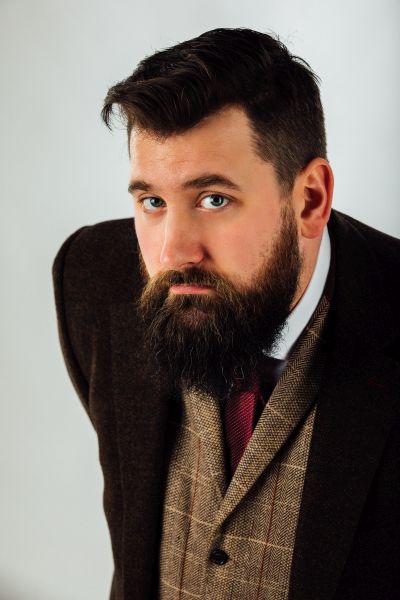 Find Garrett Millerick on the web -

These Q&A forms make you feel odd by the time you’re on the fourth or fifth one.