It’s called Follow the Leader. It’s called Follow the Leader because I think at this point in history in the western world at least, we have the worst leaders. We don’t even have good people to replace them with. But then maybe it’s a reflection of this point in history just having the worst people – so our leaders are the best of a bad bunch. I wrote the show because I spent 18 months having a go at Trump and Brexit supporters but then I flooded my kitchen in the stupidest way and I thought to myself  ‘I’m an idiot too. Some people vote for despots. Others ruin their laminate. Swings and roundabouts’.

It was in a freezing cold basement in central London. There were around 9 other acts and no audience. Every minute lasted an hour and I felt like a hostage! I don’t remember much laughter. I almost quit.

Remind myself to smile, follow the laughter, speak slowly (because I speak so quickly if I deliberately speak slowly I end up speaking at a normal speed at which I can be understood!) and set my timer on my watch.

I don’t read reviews any more! I just want the audience to have good time. I remember my first ever reviews were very kind though and I am glad I read them because they gave me the ego to continue.

They are helpful for audience members who are looking for show to watch. But they are not the definitive word on anybody’s competence in any discipline. Stars sell tickets but they don’t make people laugh, that’s my job.

No, but there are subjects not suitable for some comedians. Treading carefully is as much a part of the craft as running your mouth.

I genuinely don’t think I have, but I used to have a couple jokes where I wasn’t sure if the audience were laughing for the reasons I intended, so I ditched them. One of them was about African dictators. Shame, because I rather liked it!

I’ve been lucky enough to have a few nice moments, I like playing Union Chapel in north London. That’s always a sweet gig. First time I did it I noticed a row of audience members sipping on mugs of tea and thought ‘these are my people’. And thankfully they were!

Find Athena Kugblenu on the web - 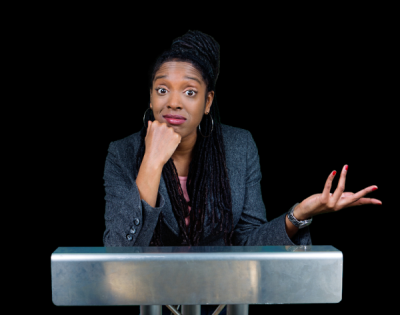 Find Athena Kugblenu on the web -

I don’t read reviews any more! I just want the audience to have good time. I remember my first ever reviews were very kind though and I am glad I read them because they gave me the ego to continue.