The idea for my Edinburgh show was borne from the fact that 2018 began with a string of disasters which left me feeling pretty rubbish. It was around this time I started noticing that the phrase ‘Live Your Best Life’ seemed to be everywhere – on t-shirts, in advertising and, most of all, plastered across social media. I set myself the mission to follow whatever advice the internet had to offer to see if I, too, could learn to live my best life. (And then write a comedy show about it). You’ll have to come and watch the show to see whether I achieved my goal or not!

My first gig was at the Frog & Bucket in Manchester and my set was about a failed burlesque class, a Valentine’s Day date gone wrong and how I secretly wanted to be a chav (it was funnier than it sounds).

Drink too much water. Have lots of wees. Panic that I haven’t had enough wees.

BEST: I can’t remember the exact wording (I don’t have it laminated or anything….) but I did a comedy play last year and the reviewer said some very nice things about me being a strong comic actor.

WORST: I used to be in a sketch group called Kooky Babooshka and the night the infamous Steve Bennett from Chortle came to watch us, a dog ran across the stage. He gave us a very unimpressed 3 stars.

My plan is to get my flatmate and fellow performer to vet them for me first… I’ll know by her reaction whether to bother reading them or not!

As long as they say nice things about me, I think they’re great.

Hmm. This is kind of a tough one to answer… firstly, I want to say I don’t find his video funny because that kind of humour just isn’t my cup of tea and it made me incredibly uncomfortable hearing a guy repeatedly utter the sentence ‘gas the Jews’… BUT… if the question is around whether he was intending to incite racial hatred then, no, I don’t think he is. He provides context at the start of the video by explaining he’s trying to turn his girlfriend’s pug into the ‘least cute’ thing imaginable – a Nazi – so we know what his views on the matter are. Whether I find it funny or not (and, again, I don’t) I think it’s a worry for comedians when a joke is being judged in a courtroom completely devoid of the context.

I don’t think any subject should be off-limits – it just depends how you deal with it. I actually think comedy provides a brilliant platform for us to discuss difficult or sensitive subjects. I used to run an open mic night and have had to tell comedians not to come back because they offended the audience so badly but, more often than not, that was down to them being offensively crap comedians rather than because they were being particularly controversial.

I actually think my first ever gig was possibly my best (or at least my favourite). To my complete surprise, I absolutely smashed it and it was the moment I realised how powerful it feels making a room full of people laugh. I just hope that ‘Live Your Best Life’ goes as well as that gig did!

Find Emmy Fyles on the web - 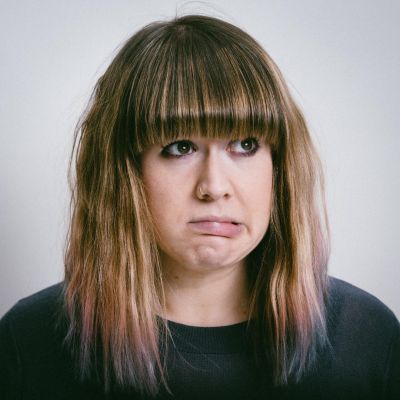 Find Emmy Fyles on the web -

I used to be in a sketch group called Kooky Babooshka and the night the infamous Steve Bennett from Chortle came to watch us, a dog ran across the stage. He gave us a very unimpressed 3 stars.