Part rap concert, part group therapy – we invite the audience to join our crew in railing against the irks of modern living. The show follows the awkward relationship between East London’s Premier Rapper of First World Problems and his surly backup dancer whilst also pulling in the crew to provide backing vocals, handclaps, hi-hat impressions and more. It’s musical nonsense where self-consciousness is left at the door and everyone has a good time.

It was at a regular open mic I used to do and up until then I’d be armed with a guitar and some whimsical observational material. That night I plugged in an iPod and ranted in rhyming couplets for 3 minutes about people using their phones when in company. It was the best reaction I’d ever had. The guitar is currently gathering dust. Anna J joined the show last year, her first appearance being on day one of Edinburgh 2017.

I drink a coke and a real ale. Seriously, in conjunction it’s pure rocket fuel.

Our best review contained vast numbers of quotable lines about audience enthusiasm and stagecraft, making it our best, but by the end of it you still had pretty much no idea what the show was actually about or what we did in it, making it also our worst.

If we get a chance. There’s a lot of running around to guest spots this year for us.

Everyone is a reviewer nowadays and we’re at peace with that.

No, though the stunt was in bad taste. However, you should never trust a pug. Ever.

I think that a good comic can make even the darkest subjects funny. The problem comes when someone without the skills to do so tries it.

I fell off the front of the stage once if that counts.

Probably a recent show at the Brighton Fringe. It was packed out and the audience were so up for it. We shouted the place down and a man in his seventies punched the air pretty much throughout, save a short nap in the middle.

Andy Quirk and Anna J was talking to Wrigley Worm.

Find Andy Quirk and Anna J on the web - 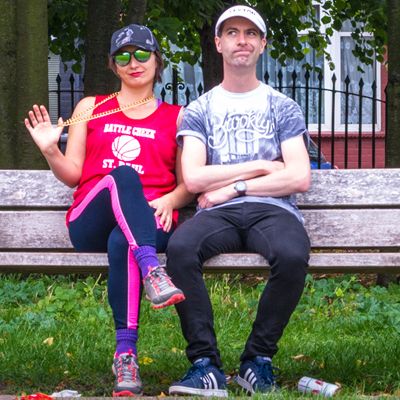 Find Andy Quirk and Anna J on the web -

Our best review contained vast numbers of quotable lines about audience enthusiasm and stagecraft, making it our best, but by the end of it you still had pretty much no idea what the show was actually about or what we did in it, making it also our worst.