It’s my second solo hour and is all about growing up, now that I’m 18. It explores what kind of world I’m becoming an adult in, and whether I myself am ready to become a fully functioning member of society. The show looks at everything from bigotry to clubbing, and even features an ‘Experimental Comedy Mime’!

I compered a youth open mic in Salisbury and my jokes were awful and unoriginal. I went down well and got away with it, but only due to the fact I was 15! Very glad to have done it at that age and gotten out of the crap hack stage ASAP…

Not really. As a general rule, I only drink water beforehand, but that’s not strict (especially when the room is rough).

I was highlighted in Chortle as a Comedian to Watch in 2018 at the beginning of the year, and there were some very kind words from promoter Geoff Whiting who nominated me. That has to be proudest review.

I’ve not had many printed reviews, so I guess the worst would be a fairly large-scale walkout at one of my Edinburgh hours in 2017. A couple had to leave for a ticketed show, which they forewarned me about, but a group of 5 others also followed them out… if anything though, the show was better for it!

Yes, but I’m not bothered by reviewers… I promise… I think… A good review is obviously a nice selling point, but at the end of the day, professional or not, it’s just one person’s opinion. Comedy is especially subjective, and the audience in the moment is the more important thing.

Some are really good; they write well, are entertaining, and share an insightful and fair opinion. Mostly though, I think people place too much value on critics’ views, and some reviewers themselves occasionally slip into thinking their word is the ultimate judgement.

I believe he is a nasty piece of work, and deserved some punishment, but to the letter of the law it’s not really ‘criminal’. However, to those talking about the importance of context, look at the wider context and you’ll see his video in a whole new light looking at some of his social media, and generally the way he conducts himself. It was more than just a ‘silly joke’, and the worst thing about it all is the airtime and platform he now has.

Nothing is too far if you have the right intentions and strike the right tone.

Friday 23rd June 2017, Salisbury. It was one of my last performances of ‘It Was Funnier In My Head’ before Edinburgh and it was just so so fun. The crowd was almost sold out and everyone was up for a laugh; the hour ended up as almost two just because they were so playful. It was so enjoyable in fact, that the show the day after suffered because I didn’t properly reset and treat the audience as new and different people.

Lesson learned, but still, I get giddy thinking about that Friday show.

Find Andrew White on the web - 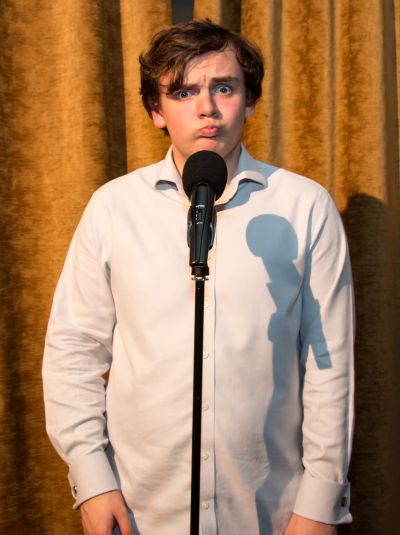 Find Andrew White on the web -

Yes, but I’m not bothered by reviewers… I promise… I think… A good review is obviously a nice selling point, but at the end of the day, professional or not, it’s just one person’s opinion. Comedy is especially subjective, and the audience in the moment is the more important thing.