Stardumb is an impressions show which reveals the secret lives and longings of famous names including Cheryl Cole, Kim Kardashian, Sharon Osbourne and Bjork. Nigella Lawson defrosts meals in her bathtub, Melania Trump hits the bottle hard and Adele sings her heart out over a custard cream.

My first gig was five minutes at the Betsy Trotwood in Farringdon. I spent the 24 hours leading up to it- pacing, sweating and weeing constantly. I was so nervous and really didn’t think I could do it. Alas I did do it, but all I remember is coming off stage and immediately saying to my sister ‘What just happened? Did I do all my jokes? I feel like I only did 30 seconds’. I was then approached by a talent scout from Britain’s Got Talent in the bar, who’s first question was how long I’d been going for… a very surreal night indeed.

I’ve yet to be professionally reviewed, but I’m gonna be super optimistic and say my best review will be of this show at Edinburgh fringe 2018.

I said I won’t and I’m absolutely sure I will.

It’s their job. But I do think on occasion they feel the need to critique something just to look like they’re doing their job properly. And if you’re a reviewer reading this – hey I love you, you’re beautiful xx

I’m not totally clued up on what’s considered a ‘crime’ these days, but I would say what I do believe is Meechan is a total prick.

Nah. I believe if done tastefully there’s room for all subjects in comedy. Sarah Silverman in particular manages to mock the most sensitive of subjects in the most perfect way.

I do an impression of Rihanna singing about pooing herself and when I performed it to a room of OAPs in a golf club in Seaford I did feel I may have gone too far.

My first 20-minute set at the Caroline of Brunswick, Brighton. The audience were absolutely adorable and the sheer sense of achievement for having remembered my entire 20 minutes of material lingered for a good few days after. I felt like Albert Einstein.

Find Naomi McDonald on the web - 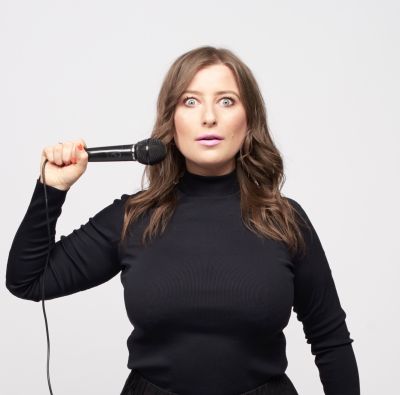 Find Naomi McDonald on the web -

I’ve yet to be professionally reviewed, but I’m gonna be super optimistic and say my best review will be of this show at Edinburgh fringe 2018.