It’s a surreal physical comedy show that uses clowning, characters and actual stunts to tell the touching but mostly really silly story of The Stuntman’s triumph over himself. It’s about things, important things! It’s about a man failing in being a man but succeeding in being a total idiot – Evel Knievel meets Looney Tunes. Audience participation is kept to a minimum and we have lots of fun.

My first gig was in Melbourne with my university friend, we did a game show called ‘You Can’t Say That’ and a love song about having sex with your grandma. Since then my comedy has matured – now I headbutt toothpicks and pretend people are exploding in my pants.

I play a fun game where I try to guess which props I’ve forgotten and I always lose.

At this year’s Brighton Fringe I got Chortled really bad. I mean it was downright nasty, even slamming my press release and my marvellous use of a smoke machine. It was strange because the rest of the audience went totally bananas for it. He must have figured that after a good show I needed bringing down a peg or two, for which I am grateful.

The happy ending to this sad tale is that the next show got a 5-star number that called me “a true entertainer with showbiz running through his veins like vintage wine”. So he also nailed my drinking habits. Oh and I got a review for a London play which called me “clearly the production’s greatest asset”. It was a one-man show.

I will read them and, if necessary, write them.

In my experience reviewers are nice people who must love comedy to watch so much of it. Journalism requires creative, entertaining and provocative writing, which is not always agreeable. I have been spurred to action by critical things written about me, so it’s a wonderfully dynamic relationship. I always communicate with my reviewers so we remember that we are human beings.

Look, my Shih Tzu does a goose step, I don’t know why he does, but I don’t go around pretending he’s a Nazi. If anything, I pretend he’s not a Nazi. Anyone who shows insensitivity to the Holocaust is a total dick, which should in itself be a criminal offence. I also think they should have added a charge of animal abuse for implicating his Pug, and furthermore I’d like to see our courts prosecute all the advertisers who have done their market research on YouTube and fallen into the cheap trend of using Pugs to advertise their shit.

Only if done badly. You have to be a master to make a funny joke about cancer. I saw Noel Fielding do a funny rape joke once – it was about what a terrible rapist he would be, and it came across as quite innocuous, which was a impressive achievement.

In my faith healer bit (there’s a faith healer bit) I coerced a Muslim audience member to eat communion Body of Christ, before sunset, on the second-last day of Ramadan.

Also I took a stunt too far once and started bleeding from my head quite profusely. Half the audience thought it was hilarious, but the other half were clearly uncomfortable. I genuinely didn’t know which way to go, plus I got a bit dizzy, and I think that made the bloodlust gang laugh even more. Eventually I did what any professional would do and improvised my way out of it, darling.

My other show Jon & Nath Like To Party has also resulted in some tasty injuries, which we talk about in our Fringepig interview, so look it up!

It was in a primary school to a bunch of drunk parents. My act went out the window because so much fun spontaneous stuff was happening and they let me go on for ages. The green room was full of snacks and one of the Mums tried to snog me after. And I got paid more than any gig I’ve ever done, like at least twenty pounds.

Find Nathan Lang on the web - 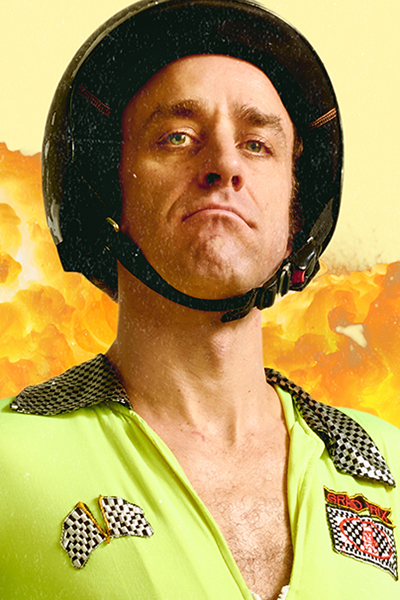 Find Nathan Lang on the web -

At this year’s Brighton Fringe I got Chortled really bad. I mean it was downright nasty, even slamming my press release and my marvellous use of a smoke machine. It was strange because the rest of the audience went totally bananas for it.