The first time I wheeled the golden tea trolley onstage was at Stoke Newington International Airport. I didn’t know the character at all as it was just an idea of an unhinged tea lady at first, but there was still something there. It was exciting and gave me the nod to keep developing the idea.

I like to do things in order: Makeup, costume, wig, warm up voice. Then, just before I go onstage, I hunch my back and run around so that I’m out of breath as I hobble on.

My favourite reviews are always from the audience. When I performed my debut show in Edinburgh in 2014, I got chatting to a woman in a pub who recommended my own show to me. I was out of costume at the time. That was a great review. My worst review was when a man fell asleep on the front row. The horror!

Yeah, it’s interesting and can be really helpful. Good or bad, I always find them motivating. Ultimately, its how the audience reacts which matters most, but an interesting quote about your work is a good thing to have.

I’m grateful for the reviews I’ve had, and I like reading reviews by people who are passionate about comedy and cabaret. Its nice to see another side of things.

I don’t know enough about it to comment, I haven’t seen the video, but remember it being discussed online.

I have an open mind: as long as there’s tea involved.

My characters are so different to my own personality. This is freeing at times, but there have been moments where its been too much. I broke a man’s glasses dancing on him once, he didn’t mind, but I was mortified!

Bestival was one of the highlights. I had 40 minutes to roll around in the sunshine with the most wonderful, rollicking crowd. Its also nice to think that the best gig is yet to come. 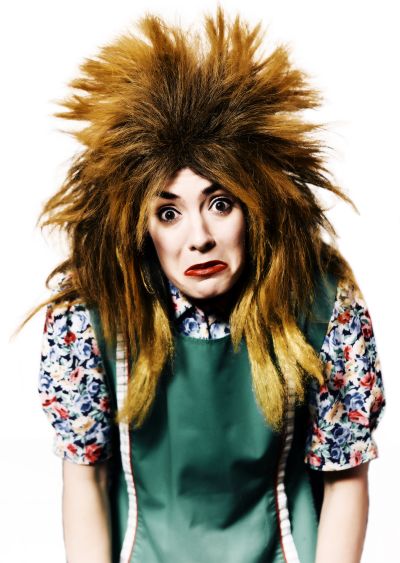 My favourite reviews are always from the audience. When I performed my debut show in Edinburgh in 2014, I got chatting to a woman in a pub who recommended my own show to me. I was out of costume at the time.