A Piggy Interview WithJohn Luke Roberts (All I Wanna Do Is... )

“All I Wanna Do Is FX: GUNSHOTS With An FX: GUN RELOADING And A FX: CASH REGISTER And Perform Some Comedy!” is a manifesto for absurdism, performed largely through the medium of fictional Spice Girls: or 55 minutes of idiotic character comedy and nonsense.

It was at university. I did a routine about dabbing insect repellent on the back of a mosquito, so it was driven to self-loathing and ostracised by its community and would die of loneliness. It didn’t really work at the time, but now I remember it I might try and revive it. It’s exactly the kind of shtick I would do.

Go to the loo. Check props are in order. If I can, I go for a brisk walk outside listening to carefully curated motivating music. Music at the moment includes Madness, Sparks, Janelle Monae and Wig in a Box from Hedwig.

I think they’re the same one – last year a member of the public hated my show and wrote “I love absurdism, but this didn’t make any sense”.

I plan not to but, I probably will.

I wish there were a lot more properly paid, opinionated reviewers, specialising in comedy throughout the year, who have a good knowledge of their subject and frequently watch a lot of it.

I’m not legally trained and I resent having to give any thought to him. I have given thought to him though, and I think he’s a man who wants to say toxic, hate-encouraging things and pretend it’s a joke as defence.

No, I don’t think so – but it’s always worth thinking if the distress a routine causes people is worth the laugh. Jokes are easy to write, there’s an infinite number of them, so having written a joke it’s a good idea to ask yourself “but what’s it for and is it worth it?”

I performed an hour show in character as my dead dad, and the whole excitement of that was playing with such a clear taboo. But because the show was an examination of the taboo, by the time the show was complete it was totally defensible and, I’d argue, ultimately tasteful. In the early stages of putting it together, though, there were definitely nights when it was in bad taste, and quite an ugly thing.

In terms of the best time I’ve had on stage, it was probably the exhilaration of doing Set List for the first time. The adrenaline rush of having nothing and making it work is hard to beat. 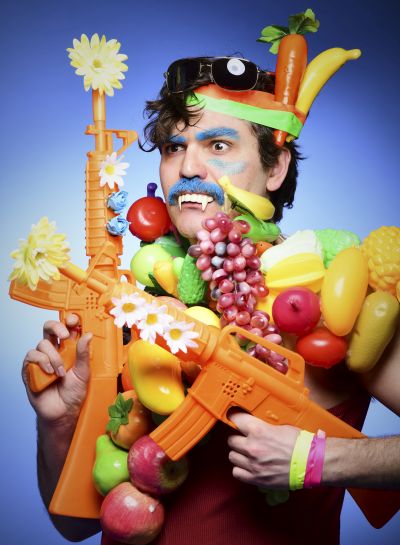 …last year a member of the public hated my show and wrote “I love absurdism, but this didn’t make any sense”.