Where Does The Love Go is a collaboration between LA-based, funk band Thumpasaurus and Norwegian-American comedy duo Zach & Viggo. Somehow a bunch of clowns have tricked a very talented band into letting them use their beautiful music to make a really dumb show.

Our first Zach & Viggo was back in Oslo, Norway in 2015. Zach, Viggo and Jonny all went to school together in France but none of them had ever performed together onstage – Zach wasn’t even in Jonny and Viggo’s class. It was really a series of coincidences that even brought us together in the first place. But somehow we pulled a miracle show out of our asses that first night and that gave us the confidence to keep going.

We all kiss each other on the mouth before shows to remind ourselves that we all love each other no matter what.

The best review we’ve ever gotten was from Steve Bennett at Chortle. He saw us back in Brighton when we were still fresh-faced babes with big plans and not a credit to our name. That really changed our lives and we’re super grateful for him. Our worst review was from a student twitter review site called FringeBiscuit. The reviewer did not enjoy the show, gave us two stars, calling it ‘awkward & creepy’. We wound up throwing that review on our poster for the rest of the run.

Every time we get a review we listen to it the same way – we highlight all of the text, use the text-to-speech feature on our laptop to read it out while playing the first result for ‘sad music’ on YouTube. It helps prevent us from taking reviews too seriously.

Some are really good, some are really bad, but everyone’s opinion is valid. We try to learn whatever we can from anyone who takes the time to critique our stuff.

We’re big believers that nothing is off-limits but that still doesn’t fully excuse you for making a bad joke. We aren’t fans of being provocative for the sake of it, you have to do it with a purpose. That said, humour can’t be outlawed — the fallout for an offensive joke should come from your audience, not government intervention.

Again, we don’t think anything is unsuitable for comedy — you can make light of everything. It’s all about the spirit of the joke and the try to push the boundaries. You’re bound to go over the line sometimes, but we try to recalibrate depending on the responses we get to that type of stuff. Comedy is meant to make people happy, not to hurt them, so if it gets to that point then something is wrong.

Oh definitely. One time we had a heckler at Late N Live which resulted in Zach getting fully naked and swinging his dick in a drunk guy’s face as the heckler was being pulled out by security. Viggo was really embarrassed by this and expressed his displeasure after the show. We did the gig again a few nights later and a security guard stopped us and said ‘Oh shit, you’re the dick guy!! That drunk guy was such a twat all night, thank you for dealing with him!!’. Viggo was very upset.

We recently did our variety show Stamptown Comedy Night at the Melbourne International Comedy Festival and that was a really surreal moment for us. It was especially memorable for us because we were able to program all of our best friends on the international scene.

Zach and Viggo plus Thumpasaurus was talking to Wrigley Worm.

Find Zach and Viggo plus Thumpasaurus on the web - 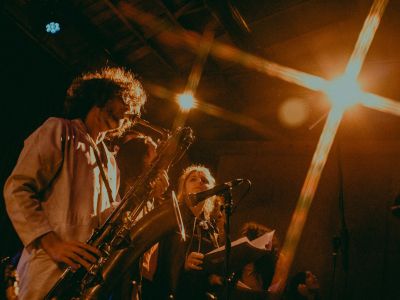 Find Zach and Viggo plus Thumpasaurus on the web -

Every time we get a review we listen to it the same way – we highlight all of the text, use the text-to-speech feature on our laptop to read it out while playing the first result for ‘sad music’ on YouTube. It helps prevent us from taking reviews too seriously.