This is our fifth Thinking Drinkers show and we’ll be returning to Edinburgh for the eight successive year. It’s called “The Thinking Drinkers’ Pub Crawl”. Having previously focussed on the history of alcohol and the great people who have drunk it in the right way, this year we are embarking on a mission to save the British Pub by embarking on a pub crawl through time featuring the Ancient Greek Symposium, the Wild West Saloon, Irish boozers, Victorian gin palaces and a rum-fuelled beach shack.

It was at The Rocket in Acton, West London seven years ago. We’d rather not talk about it.

Yes, we pour all the drinks for our lovely audiences who each gets five drinks over the duration of the show.

Dan Ackroyd from Ghostbusters and Blues Brothers said this about the show: “For serious and not so serious devotees of legal recreational consumables, this show’s your bible”

Yes. But we’ll only share them if they’re really good.

No. That way lies over-zealous censorship. Some people found it funny. Others didn’t. That should be the end of it.

Not if it’s funny

Once when we were on the M4, we missed the turning for Reading.

Looking back over your time as a comedians, tell me about the best gig of your career?

Our last one, probably. We sold out the 400+ Underbelly Southbank and the crowd were great.

Find Thinking Drinkers on the web - 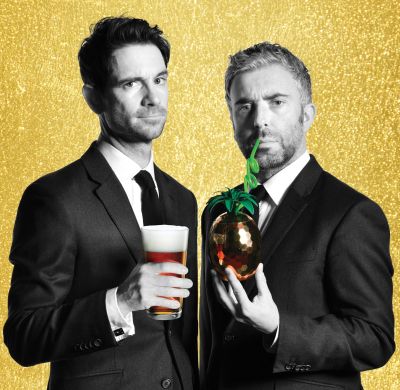 Find Thinking Drinkers on the web -

Dan Ackroyd from Ghostbusters and Blues Brothers said this about the show: “For serious and not so serious devotees of legal recreational consumables, this show’s your bible”.