‘Prom Kween’ is a pop-culture-inspired-satirical-comedy-high-school-musical-party featuring RuPaul, Cher and buckets of glitter. It’s inspired by the true story of the first ever non binary kid to be crowned Prom Kween in 2016; the same year that some douchebag became the leader of the free world.

God I went about comedy all wrong and this is almost embarrassing to admit. My first gig was my first hour in Edinburgh, because I didn’t know any better and my inner saboteur had been whispering ‘just go for it’. I was so nervous and spoke so quickly it only lasted 45 minutes.

It’s not so much a ritual as a pattern of unhelpful behaviour. By which I mean I boss everyone in sight around, and assume no one knows what they’re doing but me. I imagine Beyonce does the same.

I never plan to but I always do. Too nosey.

The reviewers that like the show are kindly, generous people who make the world a better place with their positivity. The ones that don’t, don’t understand me or what I’m trying to achieve, and I hope their cynicism doesn’t affect their day to day too much.

Well….I think he’s a stupid bellend, and if his punishment counts some way toward stupid belled prevention then I’m all for it.

I hope not because we cover quite a lot of that stuff in Prom Kween.

Oh nearly, Prom is a satire so you’re always towing the line. We do a song about what how awesome it is being a far right Republican, and did so at the time of the Charlottesville ‘Unite the Right’ rally last year. It was pretty uncomfortable for a bit, but the main performer started improving about how incredibly awkward it was and it ended up being even more impact. Prom Kween; taking lemons and making pink lemonade.

In 2014 I got invited to perform on the Edinburgh Comedy Spectaular for BBC3. I had only done my first gig 3 weeks before (see question 2). I think sometimes performing can be quite a difficult, anxiety ridden job, but occasionally the universe goes ‘Don’t worry, you’re alright’. This was one such time.

Find Rebecca Humphries on the web - 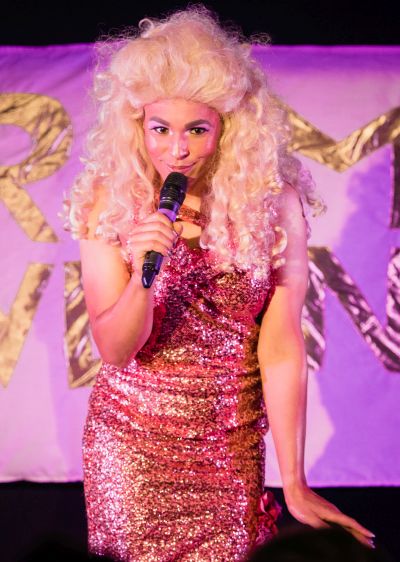 Find Rebecca Humphries on the web -

The reviewers that like the show are kindly, generous people who make the world a better place with their positivity. The ones that don’t, don’t understand me or what I’m trying to achieve, and I hope their cynicism doesn’t affect their day to day too much.