At its simplest, Zazutinany is a character comedy game show with live acts. At its most complicated the narrative goes – it is the second ever Zazutinany games, a format not unlike the olympic games, that began in zazu to solve an ancient disagreement over a block of cheese. A new feud has broke out between us and basically we want the audience’s help to decide who is right and who is wrong and that can only be determined through the medium of game.

Tell me about your ﬁrst gig

For our ﬁrst ever gig we went right ahead and booked an hour’s slot at Canal Cafe Theatre and so that we just HAD to write a show. Our families and friend’s all came down for it and from the looks on their faces afterwards they were all very concerned the we were intending to continue on this journey… Thankfully as the years have gone by that face of panic pops up less and less.

A classic P.S.P. (pre-show-poo) is often part of our prep. And since a few years ago in Edinburgh, we do the ‘No Bears’ move – putting both of your hands in the air, exposing your armpits, thus sending a feedback loop to your body/brain that tricks you into thinking you’re safe from bears or other predators… like an Edinburgh audience.

We had one particularly cutting review our ﬁrst year at the fringe, where the reviewer picked out each one of us individually and described why we were no good, ending the review on something patronising along the lines of ‘but don’t write them off yet’… We were crushed and it was only day 2 of the fringe! Years later, the same reviewer came to see our latest show and begrudgingly described how much he liked it, loved it even but by that time we were past caring what he thought so it meant very little!

As soon as ego comes into it, reviewers might as well just print a picture of themselves rather than shit all over someone else’s hard work. There are, however, some fantastic reviewers who are skilled at their jobs and even if they hate a show they can tell you why rather than just rant about how it isn’t exactly the show they wanted to see that night. But at the end of the day and to quote Chocolate Bam Boo ‘Everybody’s gotta make a living’.

In April 2018, YouTube comedian, Markus Meechan (aka Count Dankula) was ﬁned £800 for training his girlfriend’s pug dog to do a Nazi salute with its paw, in response to the phrase ‘Gas the Jews’. Do you believe Meechan committed a criminal offence, and why?

None of us have any training in law.

Everything has the potentially to be funny BUT not if you’re punching down or using traumatic material that has nothing to do with you just to shock, in those cases you’re probably not funny and probably a dick.

Almost certainly but mostly when it involves food. There may or may not have been times when our shows have included something with the potential to give people food poisoning if they got carried away. Have you ever gone too far?

As a group our best gig was probably in some ways our ﬁrst ever gig because as a result we all knew that the other 4 (we have 4 performers and a director) were willing to go out and give it a bloody go even if we were sending ourselves out with no clue if it would work. That and our ﬁrst sold out run at Soho Theatre… #notsohumblebrag

zazU was talking to Wrigley Worm.

Find zazU on the web - 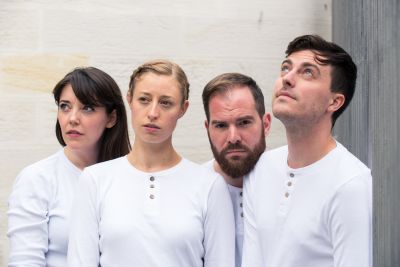 Find zazU on the web -

As soon as ego comes into it, reviewers might as well just print a picture of themselves rather than shit all over someone else’s hard work.