It’s not a proper Edinburgh show, apparently, as there’s no theme, no flip chart, no sad bit, no redemptive bit. It’s just a bunch of silly stories that make people laugh. I’m only doing it because I won ‘English comedian of the year’ and had really good fun doing the Perth and Adelaide festivals.

I did my first gig for a bet, it was at the bunch of grapes in Bristol and I was on with Wil Hodgson, Mark Olver and Russell Howard.

I have to tell myself over and over that I’m going to fail so that I focus.

My favourite ever review was from a local paper who gave me 8 stars. I asked if it was out of 10, and they replied that they hadn’t thought about that, just that the writer reckoned I was twice as funny as something he’d seen that got 4 stars.

Worst review turned out to be written by an ex, and it was for a Monday night gig in oxford attended by about 15 people, and it still burned me up for a year.

Like everyone else, I will read reviews while pretending I haven’t. I will also be waiting with bated breath for 1-star reviews of other people.

There are 3 bests. The first one (when I realised I’d wasted my life before) the one where I met my wife, and the one in Afghanistan which ended with me crowd surfing over the Tongan army.

Find Nick Page on the web - 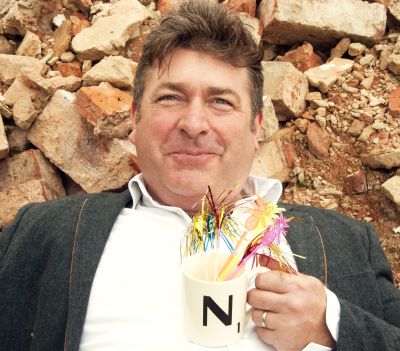 Find Nick Page on the web -

Like everyone else, I will read reviews while pretending I haven’t. I will also be waiting with bated breath for 1-star reviews of other people.