A hardcore sketch comedy show bringing Bottom-style stage violence back into vogue, along with some outrageous characters and impressions so real you’ll think you’re in Hollywood. Not to mention an actual exorcism. If a party were a sketch show it would be this.

Our first gig together was years ago in Melbourne and probably sucked so hard we’ve forgotten it. First gig since reuniting in the UK was at a serial sketch night where the winners had to present the next instalment each week. We ran scenes from our sitcom script The Interrogators (which mysteriously appeared on BBC 3 as Top Coppers after we talked to too many people about it). Our guest actor got drunk, forgot all his lines and flashed his scrotum. Also we’re pretty sure the organisers were really high. Despite or because of all this, we still got through.

Jon goes silent and stares into the distance like he’s seen some shit. Nathan becomes a total maniac, stressing over the exact placement of every prop and if the pre-show music will be played. (God help any tech who forgets to play the pre-show music.) Ten minutes before showtime, Nath realises we don’t have cheese and his asthma comes back. Jon runs to the shop and comes back exasperated with cheese. Three seconds before showtime Jon & Nath hug.

This year at Brighton Fringe we got a heart-warming 4½ stars from Reviews Hub. If you’re wondering whether to see our show, read that review. It was so enthusiastic, we’re pretty sure we only lost half a star for not calling ourselves Levene & Lang (which would make us sound like accountants, not comedians, so we dispute that docked half star).

Worst ever was last year’s Edinburgh when we paid for our only review from a local publication well-known for its generosity. It was a horror show, we died 55 minutes of death with our reviewer in the front row. There were four other people, who all hated us, and the critic was kind enough to not write us up. We may be the only act ever to get a ‘could not review’ from Mumble.

Of course, and either bounce of the walls with joy, or crawl into a bottle of whisky and blame each other for fucking the whole thing up. Edinburgh is an emotional time, especially when the serotonin runs out on Day 2.

They’re people just like you and me. Unless they’re an imbecile. You can tell an imbecile because they don’t like your show. Nath will happily point out their terrible grammar too. We try to keep an open dialogue with our reviewers (even the total idiots) because we have a symbiotic relationship in this industry and it’s all just a bit of fun. And our career on the line.

We were personally involved in the fallout of this incident, and it’s time to talk about it. We received an unsolicited tweet from a neo-Nazi, telling us to look out for Count Dankula’s Pug doing street performance, and crying about freedom of speech. (Funny how it’s always the bigots who bang on about suppression of free speech.) We offered him 2-for-1 tickets to our show to but he didn’t come. We also pointed out he’d included a picture of a British Bulldog, not a Pug. (Don’t mess with Nath on dog breeds or English grammar, he’ll fuck you up.)

Basically, we have no idea about the actual legality of this, but we suspect it may have been an entry into a Sun newspaper competition. And we can’t be more disparaging than that.

Apparently Jon’s recent break-up, because when Nath mentioned it on stage at Prague Fringe, Jon ‘accidentally’ scraped half his face off with the microphone. There was so much blood, we should have stopped for plasters, but the audience had the bloodlust and wouldn’t let us. At least we’ll never be accused of doing a parody of The Shining that’s not real enough. They give awards for that kind of behaviour in Prague. (They gave us an award.)

Jon has only dropped his shit like that once before, when an audience member called him a “speccy fuck”. Basically, jokes about Jon Levene are taboo.

All the time. Neither of us have stage combat or sensitivity training so every show has a real risk something will go wrong, and we consistently draw audiences that hope it will. Jon once pushed tomato paste so far into Nath’s ear an audience member threw up. (Nath got an ear infection and went deaf for a week.) Oh and that time we got a volunteer to pretend to be a virgin, but he really was a virgin – he was super embarrassed, but after the gig he was clearly going to get laid. A feminist stormed out when we said the Ghostbusters reboot was shit. At a late night gig last Edinburgh we invited the audience to heckle us – first the floodgates opened, then the dam burst, then it got really brutal and we didn’t know how to stop it. It ended with Nath getting punched by some guy and Jon calling them all a bunch of cunts. We still exit flyered though.

Any gig where the audience has such a good time that waves of laughter turn into applause and someone falls off their seat is the best. Any gig where we miss the smallest mark is the worst. (Yes, we are our own harshest critics.)
After the very first performance of this show at Camden Fringe, we overheard an audience member say “That was relentless!” Moments like that are very special, if he meant it in a good way.

Jon and Nath was talking to Wrigley Worm.

Find Jon and Nath on the web - 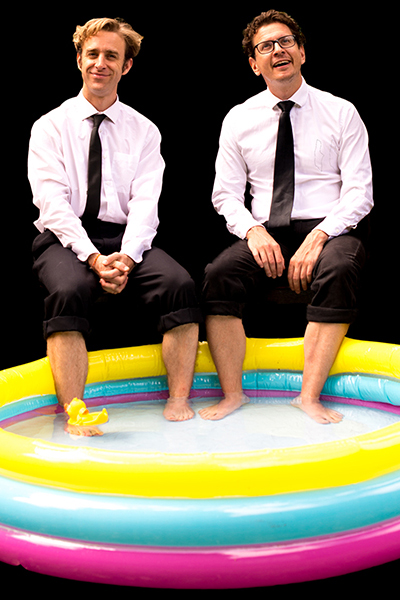 Find Jon and Nath on the web -

We paid for our only review from a local publication well-known for its generosity. It was a horror show, we died 55 minutes of death with our reviewer in the front row. There were four other people, who all hated us, and the critic was kind enough to not write us up. We may be the only act ever to get a ‘could not review’ from Mumble.