‘Eat Sleep Shit Shag’ is my first solo hour as me! My two previous one woman shows were in Character as Miss Stephanie Vange, in ‘Girl On Fire’ and ‘Have A Word’. I tell anecdotes of my previous career as a professional dancer, from Cruising to Bollywood, to where I found myself now. It is observational comedy, with a bit of insight into the backstage world of showbiz, relatable for the many and not for the few!

My first ever gig was in 2013, at the Fringe! I took a 2day stand up course, and at the end you had to do the 5 minutes you had written on the course. It was terrifying, I was so scared that I had a temporary deafness, when I came off I said to the other students – “nobody laughed??” Thankfully they had recorded it, to prove to me that they had.

Yes. I dance to Garage music. Shakes off nerves, and shakes up my energy. Garage music makes me feel 15 again lol it’s my happy place – that or 80s dancefloor classics!

Best review came in 2015 with ‘Have A Word’ I got a 5* from EdFringeReview, and whilst they may not be the most sort after reviewer, I was chuffed they were there to witness it as I felt I truly performed it as I wanted to, it felt great to do, he quipped ‘Murphy is sensational’ which was wonderful for the ego, and that I ‘got laughs from small gestures, that other comedians would hope to get from huge punchlines’ – I was chuffed that he had noticed the physical comedy, and that they had counted as punchlines! As that was the intent.

Worst Review, it was in the final of the Amused Moose Award 2015 – which was an awful gig! In a line of male stand ups, out comes in me in character as Stephanie Vange. The room was a conference centre, and ripping 10minutes from my show just didn’t work in that space, the room was kinda confused by me, and I can remember feeling protective over my character Stephanie – but it was the final of the awards so I had no choice but to go ahead, the review came that ‘Murphy was the disappointment of the day’. I knew it was doomed when I was introduced as Stephanie Vange, rather than Abbie Murphy is… Stephanie is so life like the audience wasn’t sure if I was a character or just a strange girl from Essex – Doh!

Yea I read them, why not? I have performed to people that laugh and that is what I set out to do. Not everyone will like it, but its just an opinion. I would be more worried performing to a silent room to be fair. Equally though you have to keep it real when you get great reviews, as each show is a fresh audience, anything can happen!

I think they have a responsibility to keep an open mind, and to be constructive. As reviews stay up online forever more now. I think out of respect to the Act, their hard work and dedication getting a show to the fringe – they too should do their homework and there should be a minimum amount of shows and/or reviews they do before they are allowed to publish. It should be an informed opinion, but not sure how you would change that in 2018 where the world is critiquing EVERYTHING on social media daily.

I don’t know about this story, and having answered the above question that reviewers should do their homework before commenting, perhaps I should decline to answer this one! I was uncomfortable reading the question, and I think comedy should be laughing with people not at them, and ‘comedy’ on a topic as brutal & devastating as holocaust would not be my cup of tea.

Well it all depends, who is delivering it – If you have personal experience of the sensitive subject, then perhaps with skill you can broach almost anything. It just needs to be in good taste, and check where the punchline is. Is it at the expense of the person? Is it an attack of someone? Or is it a play on words? Or are we laughing at the situation? There’s a fine line, if you’re unsure, or need a second opinion then you probably should just scrap it from your set.

No I don’t think so not in my writing or gigs – once I did in an Improv class, where I said something that pimped the scene into being about rape, as soon as I said it (can’t remember what is was now) I just immediately stopped the scene and was like ‘woah! Don’t wanna go down this road sorry everyone!’ But thankfully it was a class situation and the lesson became about how easy it can be to accidentally take a scene down a dark path – and how it’s best not too! It was immediately uncomfortable, so I think if you’re decent you know when you are crossing a line! The perils of improv comedy – freeing your mind – anything can come out!

When I performed for 100 people at the Vault Festival in Waterloo. Being so used to rooms above a pub with 25 people if we’re lucky. I was so nervous, because of the room size, but actually found it was easier. When only half the room laughed that was still 50 people! The encouragement I got from that, gave me the confidence to really go for it, and when I had them all laughing, hearing 100 voices that gave me a real taste of the buzz you can get from stand up.

Find Abbie Murphy on the web - 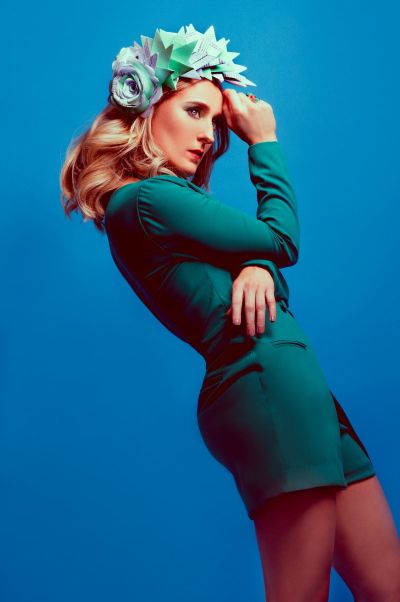 Find Abbie Murphy on the web -

As reviews stay up online forever more now. I think out of respect to the Act, their hard work and dedication getting a show to the fringe – they too should do their homework and there should be a minimum amount of shows and/or reviews they do before they are allowed to publish.