For the 6th year in a row Brendon Burns and I will be joined by a guest and we watch bad wrestling for an hour. Always a different show with different clips and it’s so fun and funny!

1999 in Fort Atkinson, Wisconsin USA I wrestled under a pair of panty house and cut off denim shorts and my name was The Goon #2. I wrestled WWF’s Doink the Clown, but it wasn’t even the real one. It was a bootleg Clown who’s real name was Eric and he smelled like crisps.

I put on baby oil…..every time! Gotta look good out there.

Well. They’re kind of the same. Our show is so weird the reviewer usually says that it shouldn’t be a show, how is this a show? Then they give it 4+ stars. Not one negative review in 5 years. Also, keep in mind, only wrestling fans come and review the show. Real reviewers don’t give this thing a chance.

They know if they don’t give us good ones, I’ll beat the shit out of them. NOT ONE NEGATIVE REVIEW!

Yea…Went to the very top of Canada for a gig once. It was light out 23.5 hours of the day. I’d say that one was a little too far.

It’s funny because I’m a pro wrestler. While wrestling, I do funny stuff and do consider myself a comedian. I’ve wrestled in front of thousands of people consistently. I couldn’t tell you a specific best gig, but to wrestle in Sumo Hall in Japan before 5000+ people and have the Japanese laugh at me having a man grab his own dick and then the power of his own dick made him flip himself….that was pretty great!

Find Colt Cabana on the web - 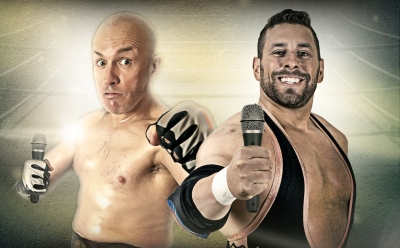 Find Colt Cabana on the web -

Our show is so weird the reviewer usually says that it shouldn’t be a show, how is this a show? Then they give it 4+ stars. Not one negative review in 5 years.