It was just a simple invitation. An invitation to spend Thanksgiving holidays with a new college friend, with my confederate flag bearer parents in rural America. Despite, Africa’s horrific past of racially driven slavery and colonialism, most Africans still haven’t grasped what racism is. Despite being free, most of Africa remains in a colonial amnesia with the history disseminated in African schools still as colonial as the 1900s.

In March 2017, the BBC recounted the shock experienced by African students on racism. The ever-evolving white presence in Africa means young Africans only know of white people in the context of Charities and International Development endeavours, so most like Africans, I held white people in high esteem as the beckons of social, ethical, moral justice and model of democracy, until I met the Rednecks.

When a younger me graciously accepted an invitation to her new American friend’s house, in rural America, I had no idea just how dangerous parts of America can be to a black person.

My first gig was in front of 200 people at the comedy café in 2010. I researched female comedians and the only ones I could find were all American and did filthy material. I naturally assumed that was what the audiences expected from comics. So I gave the people what they wanted. I did a set about dirty underpants! Don’t even!I come out in a cold sweat when I remember it. Luckly a friend stopped from gluing hair pieces under my armpits to look like long armpit hair. I know! Its what the comedy industry have been crying out for.

I have to have a thousand sips of water. I have a strange thing where I think I could wee my self on stange so I go to the toilet alot.

My best review was by the greatest man on earth called Jason who reviewed my NextUp comedy special, check it out. He completely got me and was very kind.

The worst review was when I was part of a compilation show, there were two black people a big black man and I, a small brownish woman. The reviewer mistook us for one another and said I spent the whole set speaking about my cock, proving we are all the same.

I can’t help myself but read them. I am at a different place now I understand just because someone doesn’t like my show, there are others who will love it.

I don’t mind so long as they are objective.

Racism is abhorrent but sadly prevalent. Katie Hopkins is happy dance around the graves of immigrant babies but somehow that is okay, but I’m not a lawyer so I can’t say.

No! you can talk about anything so long as you have a rationale for it.

The most memorable gig was for the England rugby on their training ground, just me with a mic surround by white people all standing up. Looked like an auction.

Find Njambi McGrath on the web - 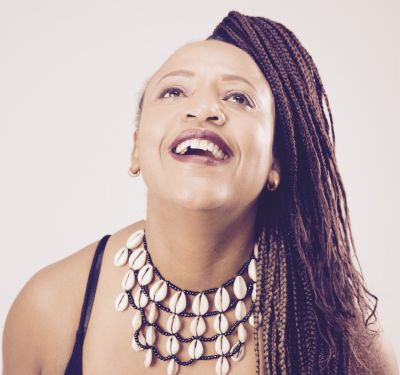 Find Njambi McGrath on the web -

My best review was by the greatest man on earth called Jason who reviewed my NextUp comedy special, check it out. He completely got me and was very kind.