A Piggy Interview WithEdd Hedges (For Eva, From Forever Ago)

My show this year is kinda about growing up and life lessons. It’s a story with a few little stories in it. I like it loads. It’s a really fun story to tell people.

It was at this little open mic night in Piccadilly Circus. I paid £4.00 to perform 5 minutes of comedy. It went better than I thought it would. So, I stuck at it.

I like to listen to music. I’m pretty susceptible to my environment so sometimes I’ll see someone walking towards me and I’ll strenuously avoid them.

The best review was a couple who got free tickets to my show and found me after the show, pushed £20.00 in my hand and said “worth it”. The worst was a big newspaper who came in 15 minutes late sat in the front row. Half paid attention then gave me 3 stars.

Nope! If its a nice review, I’ll see it on my poster. If its not, fair enough.

I think they are good. It’s obviously a skill some some reviewers are better than others. So long as the reviewer is saying “go see this” or “avoid this” I think they are very important, but I’ve seen reviews for shows where the reviews is like “MEH Its fine, I guess.” those ones are pointless.

JESUS! where did that question come from! erm. I don’t know. I’m 24 and I’m an idiot. I think its stupid joke. It’s not a funny joke. It’s offensive AF. It’s morally wrong. but it’s not a crime I don’t think.

No, but there are many comics that aren’t suitable for subjects. Hannah Gadsby spoke about rape in her show. The show was perfect. Funny, beautiful, crafted and from the heart. any subject can be spoken about. It just needs to be talked about by the right person in the right way. Again I’m 24. I know literally nothing.

I don’t think so. I mainly do stories about things that are personal to me. That’s the only thing I’m an expert in so because it’s me and my life I’m talking about I kinda get to decide where the line is drawn.

My first gig in Adelaide this year. It’s been a dream of mine to do comedy in Australia since I was about 12 years old. It was in the huge tent to about 350 people, on this warm night. Everyone was lovely. I had a lovely gig. It maybe wasn’t the best show I’ve ever done but I ran over my time by 6 minutes because I just couldn’t get over the fact I was there actually doing the thing.

Find Edd Hedges on the web - 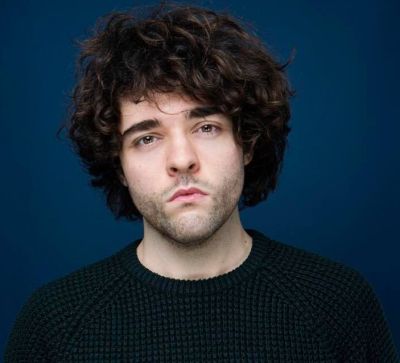 Find Edd Hedges on the web -

The best review was a couple who got free tickets to my show and found me after the show, pushed £20.00 in my hand and said “worth it”. The worst was a big newspaper who came in 15 minutes late sat in the front row. Half paid attention then gave me 3 stars.