Go Slay Dragons is the story of how I was almost shot – and it was all Rupert Murdoch’s fault. Kinda. It’s a true story of how the choir of voices in my head told me to grow up, get a real job and give my long-suffering girlfriend some security. It led me, a lily-livered leftie, to getting a job at The Sun. Then, despair at what I’d gotten into, a planned proposal, lost document and a ring led me on a crazy adventure across the seas and a surprising result.

It’s got love, adventure, Rupert Murdoch, and a choir singing songs (in my head).

Years ago, I had minor interest from Channel 4 in a sitcom script I’d written and the producer told me to do stand-up to improve my gag writing. Through a friend, I got a gig at Pearshaped comedy. Brian Damage introduced me by announcing it was my first gig and they should go easy. I took to the stage with my stomach in knots, did eight minutes of material around religion and, I don’t know if they were just following Brian’s instructions, but it went really well. I was hooked.

Final toilet trip, check the fly is zipped, grab a vodka and diet and then get to the stage.

My best review was for a 2013 storytelling show I did – they finished the review with the line ‘leaves you feeling there’s a little more magic in the world’, which was rather lovely.

My worst was my first Fringe, where Three Weeks hit me with this beauty – “Dan Cardwell is fat and sad – but that does not make him a comedian”. They were wrong of course – that was exactly what made me a comedian.

To be honest, I hardly ever get reviewed, so if I did, I would do so from the novelty. Except for Three Weeks, of course. They’ll be there to make me realise what a mistake I’ve made.

I like good reviewers (I’m not just talking about good reviews). I think they help as a guide to people. But, one person’s trash is another’s treasure and all that. On the whole, I think reviewers are good for comedy.  Except for Three Weeks. They can fuck off.

I find this difficult – free speech and all that. But, he did seem to be being wilfully anti-Semitic as opposed to trying to be funny or make any point. With the current state of hatred that seems to be around the world, we could do without people joining in under the name of comedy.

Are there any subjects that are not suitable for comedy?
I’ll defer to a wiser person than I – I recently saw an interview with Hannah Gadsby in which she stated (I’m paraphrasing) that if you are making jokes about something horrific that happens to other people, you better be doing it to start a conversation or make a point, or you should shut-up. So, I think the answer is no, but if it’s an upsetting subject, there should probably be a reason for it to be there.

I had a joke about people with disabilities in people in my first set. It was more self-deprecating, where I was playing the idiot, than wilfully offensive, but I have major regrets about ever doing it. But I was young and foolish. And thinner. And had better skin.

In 2011, I was doing my first ever fringe.   Two friends were coming to see me for the first time; my shows up to that point had been to audiences of around three people. On the day they came, the room was packed to capacity, every joke got a big laugh, and I even seemed to be ad-libbing with the talent of someone far better. I’ve done much better performances since then, but I don’t think a gig ever felt so good.

Find Dan Cardwell on the web - 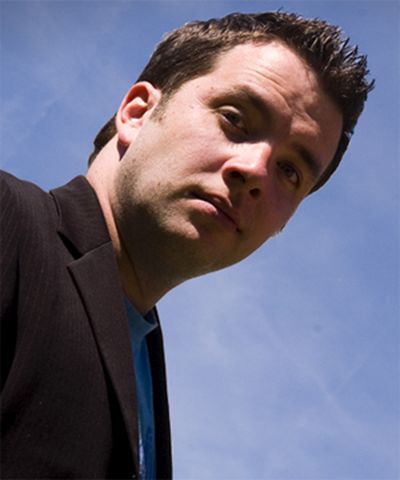 Find Dan Cardwell on the web -

On the whole, I think reviewers are good for comedy. Except for Three Weeks. They can fuck off.