Common People is a show by two stand-up comedians, Paul Cox and Janet Garner. Both were brought up on council estates (Portsmouth and London) and were nurtured the working-class way.

Paul and Janet are ordinary, common people and very happy with it. They aren’t trying to educate anyone, teach them where they are going wrong or how they should think and if they were it would be dangerous to listen. All they want is to take your mind off the world and enjoy an hour of belly laughs.

This is what happens when comedy comes out of the council estate, so come and have a laugh if you think you’re hard enough.

My first gig was a comedy showcase. After completing a 6 week introduction to stand up comedy course at the School of Comedy, in Camden, London.

The gig was at the Backyard Club in Bethnal Green (December 2015) in front of 150 people. The gig was set up perfectly for an absolute beginner and it went really well for me. It didn’t however prepare me for the (brutal) open mic circuit. I left that gig convinced I was 2 possibly 3 weeks away from my own telly show… I then performed at the Lion’s Den open mic night off Shaftsbury Avenue and died on my arse.

I drink water. Too much water. Then I need a wee. This has proved problematic, one time I was called on stage, mid wee and ran to the stage tucking my tackle in.

My worst review was from Steve Bennet (Chortle) after performing at the New Act of the Year final (2018). He stated that Micky Flanagan had already covered the working class sufficiently and whilst admitting I was ‘pleasant company’ deemed by material as ‘instantly forgettable’ as a result.

My best review was from Bruce Dessau (Beyond the Joke), again after the very same gig. He compared me very favourably to Micky Flanagan (apparently he is the only/go to comic for working class comparison). He was very kind and contradicted the things Steve Bennet had said.

Yes, Intently. Basing my future happiness on every. Single. Word.

I’m agnostic about reviewers. I do use pull quotes but in my experience, for the most part only comics read reviews.

Comedy is very subjective and as such I think most people are inclined to make their own minds up.

I am uncomfortable about jokes of this nature. Largely because of how they can be used to justify or empower causes which I disagree with.

I would stop short of saying it is a criminal offence, however. I’m equally, if not more, uncomfortable with creating a ‘safe space’ for comedy. Comedy, of all kinds, should be out there for all to see. Offensive comedy will always exist because people are offended by a multitude of things. If it’s out there, we can have the debate. One person’s Nazi Pug is another man’s Garlic Bread.

There are many subjects I wouldn’t personally cover but I think comedy is everywhere.

For me, life is comedy and life can be not liking baked beans or bowl cancer.

I do talk about council estates in a way that can make middle class people feel uncomfortable but that’s just right. Not too far.

I have had lots of lovely gigs but my favourite is probably my first paid spot on a pro line-up. It was at the Wivenhoe Funny Farm club in Wivenhoe, Essex. As far as the audience was concerned I was another pro comic and they afforded me that respect. They were also wonderfully warm and most importantly specifically there to see comedy and have a good time. It was the first time I felt in complete control, whilst being in the moment. I knew what I was going to say but never thought about it, I just relaxed and thoroughly enjoyed myself. There is nothing better than making a room of complete strangers laugh, however that may manifest itself.

Find Paul Cox on the web - 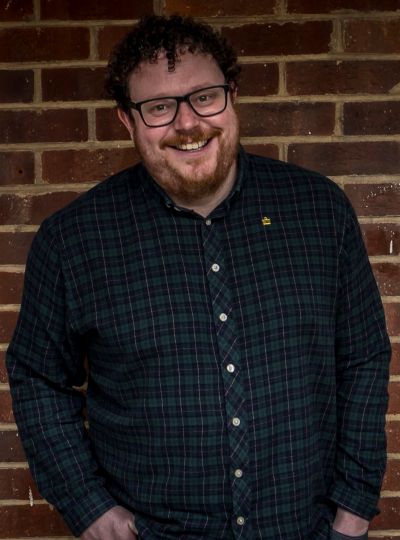 Find Paul Cox on the web -

I’m agnostic about reviewers. I do use pull quotes but in my experience, for the most part only comics read reviews. Comedy is very subjective and as such I think most people are inclined to make their own minds up.