A Piggy Interview WithDavid Ephgrave (My Part in his Downfall)

It’s essentially a one-man self-character assassination with jokes; like performing an autopsy on myself using a mic instead of a scalpel. In the show, I try to work out why a performer who’s achieved more than he perhaps gives himself credit – and who apparently refers to himself in third-person – can only ever remember the bad bits to discard the good. I also consider other culprits who’ve encouraged my negativity, from the man on the street to the reviewer in the audience to the mother in my parents.

It was at junior school, where I played the theme from Blackadder on the piano while everyone filed in for assembly; I don’t why I did this, but I’m pretty sure Howard Goodall never received any royalties. I followed my debut a few months later by dancing to Hale & Pace’s 1991 Comic Relief single ‘The Stonk’ while balanced on a table in front of the whole school; my teachers must have been stuck for material.

Nothing I’d admit in public. Last year, I listened to an episode of Hancock’s Half Hour before every show to get me in the mood for comedy. I also meditate, do a vocal warm-up and drink enough coffee to undo my meditation.

They’re one and the same. Last year, a joke I wrote made it into the Daily Telegraph’s Funniest Gags list; I could finally say a minute of my show had been critically acclaimed. Chortle described my first solo show as ’forty-five minutes of meh’, which I was disappointed about as the running time was actually fifty-two.

Only if they’ve been carefully vetted by the people I trust and, even then, I’ll try not to; I’m riddled with enough self-doubt as it is to risk giving myself something new to worry about.

Reviewers are not on my Christmas card list. I’m not sure having someone tell you whether to enjoy a show is a necessary service. It’s all subjective anyway. All the best artists from The Beatles to Morecambe and Wise have been slated; often by critics who never walked the walk themselves. Bad reviews can stifle creativity and, at worst, make performers give up. You should only seek the opinion of those you trust and respect.

As always, context is important; sometimes things get blown out of proportion by people who never saw what caused the fuss in the first place. In isolation, what he did sounds awful and tasteless, but if you watch the clip it’s relatively harmless, if misguided. Whether it’s funny is another matter. Either way, suing comics for the jokes we make risks leaving us very little to joke about.

My general rule is ‘if you need to scan the room before delivering a line, you probably shouldn’t say it’. But if you approach a contentious topic with intelligence and you’re not being narrow-minded, you can potentially discuss anything.

Not yet, but maybe this year’s the Fringe to do it.

Ha. “Career”. Some of my best experiences as a comic have happened at my own club, Mostly Comedy, sharing a bill with my heroes. There’s something very surreal about performing on the same line-up as an act you grew up watching. My favourite was when Paul Daniels played our club a few months before he sadly died; while I was onstage I spotted him walk in at the back of the room and I had a bit of an out-of-body experience. Later on that night, he asked me to set his props for him; if you told eleven-year-old me I’d ever do that I never would have believed it.

Find David Ephgrave on the web - 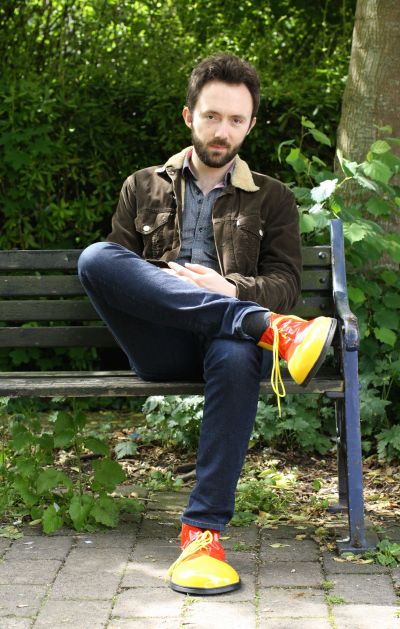 Find David Ephgrave on the web -

Reviewers are not on my Christmas card list. I’m not sure having someone tell you whether to enjoy a show is a necessary service. It’s all subjective anyway. All the best artists from The Beatles to Morecambe and Wise have been slated; often by critics who never walked the walk themselves. Bad reviews can stifle creativity and, at worst, make performers give up. You should only seek the opinion of those you trust and respect.