“Georgia Tasda Means Business” is a scathing and silly drag satire of capitalism and the politics of LGBT+ inclusivity. It’s equal parts business masterclass, TED talk, and Undercover Boss in drag. Georgia Tasda will reveal the tricks of the trade she used to build her (fictional) business empire, and will be smashing through the glass ceiling and the fourth wall. Expect queer capers, gender-bending and of course, funny business!

Georgia Tasda’s first proper gig was at the legendary LipSync1000 drag contest at The Glory in London. I did a lipsync to a supercut of songs and youtube viral vids about cats, while dressed as a bondage kitty princess, complete with cat-eared gimp hood. The MC introduced me with a French accent as “Georgie T’asda” so nobody got the pun (hint, it’s a pun on George at ASDA).

I don’t have time for rituals! It takes me an hour and a half to get into my makeup! Well, perhaps I do: it’s not really a ritual but I always need to do a nervous poo exactly 10 minutes before going on stage.

My best review came by chance, when a young man happened to get chatting to a friend of mine on a night out in London. He’d come to see my show in Edinburgh, and said it had helped him come to terms with being gay and coming out. Hearing that you’ve made a positive impact on someone’s life makes it all worthwhile.

My worst review was from the judges of Not Another Drag Competition. For one of my acts I dressed up as punk Princess Peach, in a dress that said “Fuck The Monarchy” on it, and did a lipsync to “God Save The Queen” by the Sex Pistols. During the act I devoured a turnip and tossed raw mushrooms into the audience. Virgin Xtravaganza, one of the glamorous judges, was bopped on the nose by a shitake. She was not impressed.

Yes! I’m always interested to hear what people think: the good and the bad.

When I put my material together, I’m doing it with an LGBTQ+ audience in mind, so I’m much more interested in what reviewers from within the LGBTQ+ community have to say. A lot of my jokes are universally accessible, but I do make references to aspects of queer culture and experience that your typical reviewer might not get or appreciate. So I always bear in mind who the writer is when I read a review.

He was found guilty of committing a hate crime, under the Communications Act 2003, for grossly offensive material. I agree with the prosecutor, Sheriff O’Carroll, that freedom of expression is of utmost importance, but “in all modern democratic countries the law necessarily places some limits on that right”. To me, Meechan seems to be an idiot caught in the fray, but ignorance to the law is not a “get out of jail free” card. Freedom of Speech DOESN’T MEAN YOU CAN SAY WHATEVER YOU WANT. Across the globe we are seeing a surge in the far right, and we need to take a stand on what is acceptable and what is hate speech. What if he had used the commands “burn the faggots”, “rape all women” or “lynch the n*****s” instead? Meechan’s actions were a hate crime. He has shown no remorse and clearly does not understand why his “joke” is offensive. Society changes, and comedians need to keep up with the change. Material that would have been acceptable in the 1970s would cause extreme offence now, and I think few would argue that the changes have generally been progressive.

I am a proud snowflake and member of the PC brigade. That said, I don’t think that any topic is ever off limits, but that doesn’t mean anything goes when it comes to jokes. Context and intent are SO IMPORTANT. It matters who is telling the jokes, who is laughing, and what they are laughing at. Parody is a powerful tool for holding a mirror up to what’s wrong in society, but far too often “irony” is used as an excuse for making lazy and regressive jokes at the expense of marginalised groups. One of the tactics of the far right is to dress up extreme and repugnant views as “just a joke” and therefore I think we have a responsibility to make jokes that are unambiguous in their intention. That means making sure that the jokes are being laughed at for the right reason. People shouldn’t be laughing at me because “it’s a man in a dress lol”; they should be laughing because my jokes are intelligent and funny.

No. I love pushing boundaries with my drag. I have an act where I perform a magic trick and the card is hidden, shall we say, in “nature’s hot pocket”. I enlist the help of an audience member to retrieve the card with Marigolds. One time an old friend came along to a show on a first date. She did not expect to find herself on stage pulling a playing card out of my rear end.

My best gig was when I won the grand finale of Not Another Drag Competition in London. It was the culmination of a long and gruelling competition, and it was also the night I found my comedy voice. Loads of friends and family came down to support me, and the room was filled with love. My friend gave me one of Grayson Perry’s old wigs to wear, which is now my lucky wig!

Find Georgia Tasda on the web - 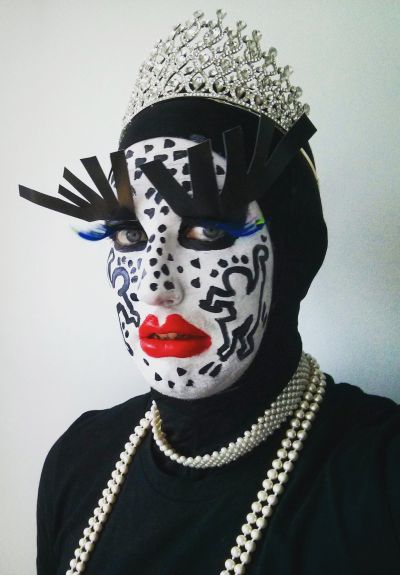 Find Georgia Tasda on the web -

My best review came by chance, when a young man happened to get chatting to a friend of mine on a night out in London. He’d come to see my show in Edinburgh, and said it had helped him come to terms with being gay and coming out.