Digitally-enhanced millennial neo-cabaret satire at the cutting edge. Also, me at my most annoying.

My onstage character is a concoction of some of my most despicable habits: I started with tech addiction, added some deluded “saving the world” narcissism, mixed in a handful of genuine and growing concerns about our future, and stirred it with my inexhaustible hunger for the truth. Then I chewed it all up with my newsfeed – spitting out (most of) the fake news using wily research nous – and poured the lot into an ice-white vertical lycra one-piece. Voila! My character is a 6 foot tall iPhone-toting futuristic vision in stacked heels; privileged, and yet socially conscious, hitting on hot topics like they’re Tinder profiles, asking hard insightful questions despite being an idiot, and backed up by her supremely more insightful (and far less obnoxious off-sider) played by musical maestro Gareth Chin.

I was dressed in a long flowing velvet gown like an 8 year old Galadriel on a budget. I played the Irish whistle, which was difficult considering I had fangs like pre-dental work Bowie.

I run around in circles, I sing songs in high speed at Gareth’s face, and I do made-up yoga moves in the heels I wear for the show.

One from this year’s Adelaide Fringe said that the hour they spent at my show was:” categorically worth every minute – and maybe just the whole fabric of modern Western civilization and culture.”
I mean…LOL hyperbole, sure, but that’s high praise. AmIRight?

The Scotsman quote from last year was a favourite. “First rule of the Fringe (or, indeed, life): never mess with a woman who can do a handstand across your lap while maintaining perfect pitch.”

Worst review was from Fest Mag in 2016. It was bizarrely and relentlessly cruel, stating the opposite to what 99% of critics say they enjoy about my work. The reviewer astutely observed that, before the show started, “There is the sense that an event is about to occur.” Yes. Well. Top notch journalism there from Fest Mag.

I like the clever ones even if they don’t like my work. I love anyone who engages with my show in a deep critical-thinking way, because beneath the humour and the entertainment value there are carefully thought out concepts and philosophies. I relish the chance to gain insights into how people interpret my shows. Some of my favourite “reviews” are personally delivered, and don’t come via publications. They turn into interesting, lengthy conversations with strangers over email or Messenger.

What a question. It’s definitely offensive, but I don’t think it’s criminally offensive. If we’re going to persecute people with offensive opinions, or people performing deliberately offensive actions, then surely there are more dangerous people than a YouTube comedian. Can I nominate President Donald Trump?

I’m not sure I’m suitable for Cabaret. I’m just there because it’s a safe-house for the weirdos.

Cabaret is one of the best places to explore controversial subjects. Ideas can be subverted and parodied; they can be presented in a way that poses the question, but doesn’t necessarily portray it as the true opinion of the speaker, only that it is a subject worthy of conversation.

Yes, literally. Fell off the stage during the fight scene at the end of the show.

It was this year at the Adelaide Fringe on the eve of the South Australian State election, and there were government ministers in the audience. Themes within The Executioners were thrown into an immediate and brutal light: the myriad of social and environmental issues that seemed to me to have gone unaddressed during the election campaign, the idea of whether an individual can make a difference, and – the question on so many lips – whether our politicians are worthy of the responsibility for shaping our future. It all felt very real and very relevant. The night had some of the biggest laughs of the season and ended in a powerful standing ovation. Politicians included.

Find Anya Anastasia on the web - 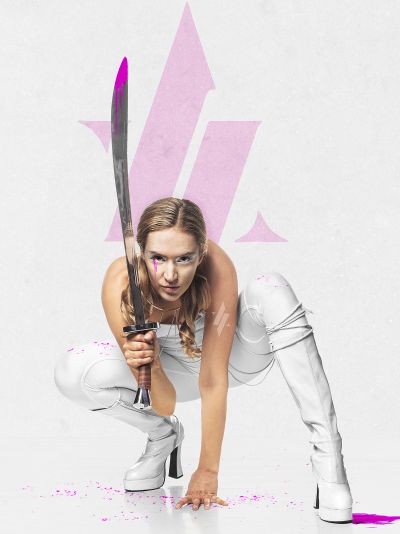 Find Anya Anastasia on the web -

The Scotsman quote from last year was a favourite. “First rule of the Fringe (or, indeed, life): never mess with a woman who can do a handstand across your lap while maintaining perfect pitch.”

Worst review was from Fest Mag in 2016. It was bizarrely and relentlessly cruel, stating the opposite to what 99% of critics say they enjoy about my work. The reviewer astutely observed that, before the show started, “There is the sense that an event is about to occur.” Yes. Well. Top notch journalism there from Fest Mag.