My show this year is called ‘Teenage Heartblob’, and in it I reflect on my personal and professional experiences of weighing more than you’d like to. Between being overweight in my late childhood, obese in my early teens and now being closely involved in other people’s experiences of obesity as an NHS doctor, it’s a subject that I have perspective on from lots of different angles. In this show I try to share my insights into an important, sensitive topic in the most engaging and entertaining way possible. I think I’ve been able to strike a good balance with the show tonally, avoiding the pitfalls of coming across as disrespectful or overly preachy, and audiences have reacted really well to the early previews versions. I’m really looking forward to taking the final product up to the Edinburgh Fringe festival.

My first gig was at my secondary school talent show, when I was 16 years old. At the time, all the other acts at the show were music or dance acts, and I was the first person to do stand-up comedy. As a result, the crowd were happy that I was bringing something novel to the show, and so were really supportive. My set was 15 minutes long, comprised of 80% my own material, 20% jokes I’d stolen from the internet, and went way way way better than anyone’s first time should have gone. My next 3 gigs were also at school talent shows, and were all pleasant experiences.

My first gig on the London open mic circuit was in a pub basement in King’s Cross, and was a crashing return to the reality of being a new comedian. Thankfully the positive buzz from my first few gigs kept me going enough to build up confidence on open mic circuit too, and I’ve been going ever since.

I normally take lots of deep breaths and say tongue twisters over and over again, to try and loosen up before I get on stage. I used to think this wasn’t too outrageous, until someone pointed out to me how menacing I looked doing this in the corner of a dimly-lit backstage area…!

My best and worst review was The Scotsman’s review of my 2017 Edinburgh Fringe show ‘Open Arms’. They gave me a four star review and a nice big colour photo in their weekend print edition of their newspaper, which I was massively chuffed about.

One of my favourite bits of the show, was a joke in which I talked about how time-consuming medicine and comedy were, and how I had to cut lots of corners in my relationship to make everything work, making me the ‘best worst boyfriend of all time’. I enjoyed performing the segment because it was very tongue-in-cheek and it gave good variety to the show.

The Scotsman also enjoyed that part of the show. Unfortunately for me, the way they decided to convey their enjoyment was by writing ‘he’s amusingly candid about being a bad boyfriend, his girlfriend a distant third place behind medicine and comedy’. A distant third place. Naturally, having that put in print and distributed across the whole of Scotland didn’t do a lot for my girlfriend’s self-esteem… I talk about that review in my new show this year, along with how I’ve gone about making her feel extra-special again(!)

Oh absolutely, in case they give me more ideas for new material!

I think reviewers are just like any other service provider. A good reviewer can capture the essence and celebrate a show they enjoyed really well, while maintaining the professionalism to stay objective and constructive about shows they didn’t. Bad reviewers can be nasty about shows, but can be equally capable of missing the point of a show they did enjoy. Either way, reviews are good for increasing the publicity and profile of a show, which is crucially important, especially at the ever-expanding Edinburgh Fringe! All I can do is try my best every night and hope that all my reviewers are good eggs.

I do, because this falls within the boundaries of inciting racial hatred. I think it’s sad when people confuse ‘freedom of speech’ with ‘freedom to be an arsehole’, especially when there are so many more socially acceptable ways to be an arsehole, like not letting cars out at a junction, or asking for a discretionary service charge to be taken off a bill.

It all boils down to premise vs punchline. I think any topic can be used to set the scene for a joke, but not all topics can be the joke. I believe that experienced, more conscientious writers and performers already know this, which is why you do still hear good jokes related to polarising topics.

I’ve definitely been guilty of crossing the line, particularly when I was a young new comic, trying to find my voice on stage. When you start out, your main goal is to get the laugh, with style and tone often a secondary consideration. A lot of the stuff I said on stage in my first 30-40 gigs are stuff I wouldn’t even dream of writing on scrap paper now, but I think it was important to go through that early phase, to gain that point of reference which helped me identify the type of comedy I really wanted to be performing.

Looking back over your time as a comedian, tell me about the best gig of your career.
I think the best gig in my career was still my first one. Not only was the crowd lovely, but I also had no real comedy aspirations or no previous gigs to compare it to. It was just me telling stories in front of people for the fun of it. I still enjoy stand-up, and with new pressures have come new opportunities, but I always look back at my first few gigs as comedy in its purest form. Jokes for the sake of jokes.

Find Kwame Asante on the web - 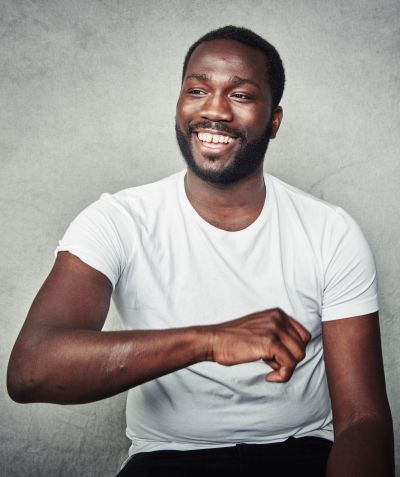 Find Kwame Asante on the web -

I think reviewers are just like any other service provider. A good reviewer can capture the essence and celebrate a show they enjoyed really well, while maintaining the professionalism to stay objective and constructive about shows they didn’t. Bad reviewers can be nasty about shows, but can be equally capable of missing the point of a show they did enjoy.