Luke Rollason’s Planet Earth is a comedy one man nature documentary which sees me create the third series of David Attenborough’s Planet Earth onstage, by myself, with only a surreal imagination and office supplies as my tools. It’s cheaper than the zoo.

My first gig was when I was 16 years old and a friend booked me as a support act. I had ten minutes and I raced through my material in four, which at the time I thought meant I was pretty much a genius. I didn’t perform solo comedy again for seven years, it was that hard to follow.

I have a really complex pre-show ritual, but I never have time to do it. I’m always too busy strapping an office lamp onto my head so I can pretend to be an anglerfish whilst “The Circle of Life” plays over the audience discussing whether or not this actually has anything to do with the BBC. The Lion King has been ruined for me forever. So has strapping office lamps onto my head, which I used to do for fun before it became my job.

Best review: “That’s what Daniel Radcliffe ends up doing when the Harry Potter money dries up” (A Well Known Stand Up Comedian, performing after me)

Worst review: “I hated this production and Luke Rollason was the worst example of everything I hated about it” (Audience Review, 2015) (in this show, I played the role of a table)

I used to review theatre. One year, I fell asleep in half the shows I reviewed. You can tell which shows they are because I go into excruciating detail in describing the events I was awake for. I tend to overcompensate when lying. So I distrust any review which mentions anything that happens in a show, or the performer’s name, or the venue.

Questions like these are why I generally stick to mime.

I think judging this is pretty much the comedian’s job. I don’t mean that only comedians hold moral authority when it comes to humour – quite the opposite. You play for an audience, you have to make them laugh, and you have to get out alive. If you do those three things, then your subject was suitable. What doesn’t fit into this equation is now (thanks to the internet) that audience is huge and unknowable. But I’m not sure I believe in moral certainties – and what we call certain now won’t be in the future. What decides whether something is a suitable subject for comedy is the reaction, which is pretty paradoxical. If everyone found something super offensive funny, then it would be considered to be good material. Making that judgment call – and making a subject suitable for comedy – that’s the job of the comedian. That doesn’t just include potentially offensive subjects, but potentially excruciatingly boring ones too. I’m still waiting for the first great set on the subject of gravel.

So the comedian’s job is the same, but perhaps now it’s a little harder.

I think I once contributed to the break-up of a French couple, by dancing with the boyfriend and asking him if I could go back to his. I genuinely didn’t have anywhere to stay that night though so it wasn’t malicious. Also, one Edinburgh I pranced around several gigs wearing now underwear and a Snow White dress I bought at a charity shop. I later returned the dress to the charity shop. That was too far.

I performed at Sofar Sounds a few times in the last year. It is a “secret” show, where people pay specifically for the experience of watching music in complete appreciative silence, sat on cushions on a stranger’s floor. Except, I keep getting booked. Last time I spent half of the twenty minutes set inside a cardboard box, making trumpet sounds with my mouth. It was heaven.

Find Luke Rollason on the web - 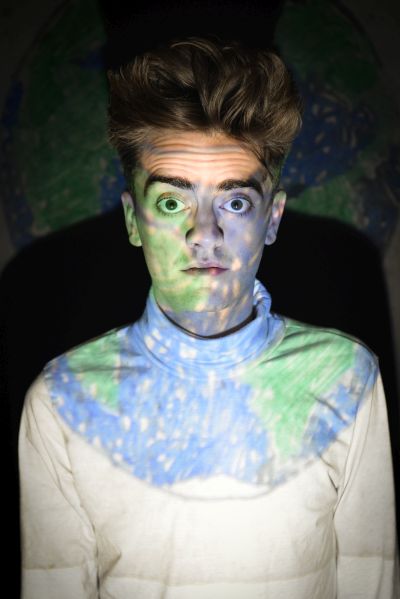 Find Luke Rollason on the web -

I used to review theatre. One year, I fell asleep in half the shows I reviewed. You can tell which shows they are because I go into excruciating detail in describing the events I was awake for. I tend to overcompensate when lying. So I distrust any review which mentions anything that happens in a show, or the performer’s name, or the venue.