This is my debut Edinburgh show, and it’s about my experiences of trying to navigate growing up – with all that the recklessness of youth entails – but also trying to do that whilst dealing with epilepsy, which I was diagnosed with at 14. That makes it sound like it’s going to be very deep and heavy and not exactly a laugh-a-minute, but most of my experiences growing up – with and without the epilepsy factor – had a humour to them, and so I want to tell them.

Ahh. Now I only started doing stand-up at the end of 2016, and since then I’ve learnt that what you’re meant to do is do a five minute open spot, then keep doing those until you can get a 10 minute spot, and then keep doing those until you get a 20 and so on. I didn’t know that when I started. So I entered my local fringe festival in Ilkley and applied to do a stand-up comedy show. I just wrote as many jokes as I could, made some flyers and put them literally all over Leeds, and it was free so I had no idea how many people would come. It somehow filled out the small theatre (I think most people came because they couldn’t believe was going to attempt stand-up comedy!) The show was 40 minutes and it’s still one of my favourite memories ever.

When I get really nervous I sometimes stutter, or my mouth dries up. So now I do some warm-up exercises that I learnt when I was in the youth theatre as a kid. Stuff like tongue-twisters, pretending to chew a massive toffee to loosen up your jaw, blowing raspberries to warm the mouth up. I was a bit embarrassed to do it at the start, but I’ve since seen other comics do much weirder rituals before going on stage, so saying a few “thirty-three thieves this, thirty-three thieves that, thirty-three thieves those” really doesn’t seem so weird in comparison!

My only experience of reviews was after the ‘So You Think You’re Funny?’ final. I remember at the after-party loads of people congratulating me, and several comics kept telling me I’d be getting reviewed by Bruce Dessau. The next morning, I saw the article in Beyond The Joke, and his review of me started with “The second half started with Maisie Adam, I wasn’t keen on her vertical striped shirt” and in typical Yorkshire-lass fashion, I was fuming – I’d just won the biggest stand-up competition in the UK and he was bringing up the fact that he didn’t like my shirt! However, in fairness to him, I then read on and it said “but I’m only bringing that up because I can’t find any other faults with her set” and then suddenly he was my favourite person in the world – haha! So that one review went from feeling like the worst to the best in the space of about five seconds.

With this being my first one, I’ve asked other comics for their advice on how to handle Edinburgh and they all said the same thing; “Just enjoy it, have fun and don’t read the reviews” which is all very well but deep down, I know myself and I know I’m going to! But that doesn’t mean I’m not going to enjoy it and have fun.

Not to sound like a pretentious prick, but art is subjective isn’t it? When I went up for the semi-final of So You Think You’re Funny last year, I genuinely didn’t expect to get through, so I thought I’d make the most of being up there and booked to see as many shows as I could. I saw loads that I thought were bloody brilliant, but when I saw the reviews they got, they were pretty average. Similarly, I went and saw shows off the back of reading some 5 star reviews, and they were good but I didn’t rate them as much as some of the ones that got say, three or four stars. It’s just down to personal taste really, and how can anyone control that?

This sparked a very interesting debate, and a much-needed one I think. There were fair points on both sides in my opinion. What rocked the boat was that the judge said that the context of the jokes should be disregarded, and I understand the point put forward by the people who contested this, as context definitely is important when it comes to comedy, as is perspective, personal experience and importantly, intention. I read David Baddiel’s article reflecting on it (Baddiel originally defended Meechan) and he wrote how Father Ted writer Graham Lineham sent him an article from an alt-right website instructing followers on how to spread hate-speech effectively. This was precisely it; to make it seem light and jokey; to hide in plain sight. This, doubled with the fact that Meechan turned to figures such as Tommy Robinson and Katie Hopkins to defend him, didn’t help his case. At the end of the day, we don’t know what Meechan’s intention was, only he does. Was it funny? In my opinion, not really. But as I said above, everyone has different tastes. Was it intended to make people laugh? Yes, but the question is – who? Only Meechan knows the answer to that.

I think it depends on the comedian; their perspective and their experiences. I remember after the Weinstein scandal happened, there were lots of comics talking about it in their sets. It’s very different to hear a harassment joke from a women who has experienced that culture, and is drawing on these experiences to tell the joke, than to hear it from a bloke who’s making his observations on the scandal from a by-stander point of view. It’s no different to how Dave Chapelle can make jokes on racism because he draws on his personal experiences of it, whereas I don’t and shouldn’t because I’ve not had that perspective, and it would be wrong – and frankly pretty bloody weird – for me to try and pretend I have, just for a joke.

Not in my comedy sets (so far, touch wood). But when I was growing up I was that kid who would literally do anything if it got a laugh. I would prank anyone in any way, and I literally wouldn’t stop; I didn’t know how far was too far. Often my mates would get really pee’d off with me and go off in a mood because I’d but salt in their water bottle yet again, or put mashed banana in their PE trainers, or tripped them over in the hallways. I loved taking the pranks too far, that was the best bit! I used to watch Jackass with my brother on MTV when our parents were out, and they taught us that pranks were best when they went too far. Not the best lesson to be taught – haha!

It’s got to be the SYTYF Final. I’d honestly never performed to that many people in my life. I was shaking beforehand, and Aisling Bea – who was compering the evening – was just so slick throughout the whole thing, I couldn’t work out how she was so relaxed! I remember walking out, and the room was proper hot – all you could see was 350 people fanning themselves with the programme – not exactly an encouraging sight! That performance is still a bit of a blur, but I remember feeling just absolutely buzzing. I loved every second. I watched all the other acts from the balcony, and when they announced the runners-up – who were bloody brilliant – I wrote myself off in my head. I was like them contestants on Pointless who get knocked out “Oh well, we’ve had a lovely day…” etc. Then they said my name as winner and I just couldn’t believe it. My parents were on holiday at the time, and I all I kept thinking whilst making the little speech was “I can’t wait to ring them!” When I finally got a chance to ring them, they didn’t stop screaming down the phone for a good five minutes.

Find Maisie Adam on the web - 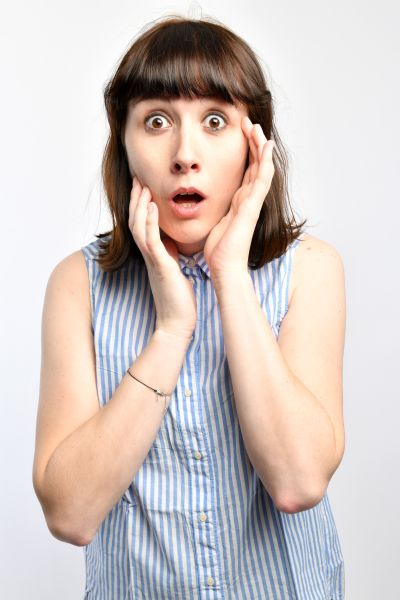 Find Maisie Adam on the web -

I’ve asked other comics for their advice on how to handle Edinburgh and they all said the same thing; “Just enjoy it, have fun and don’t read the reviews” which is all very well but deep down, I know myself and I know I’m going to!